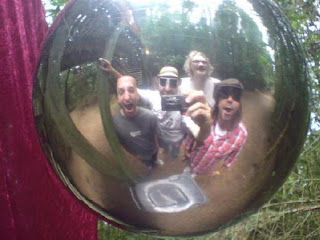 The Isle Of Wight. The Garden Isle. The home to three quarters of Lucky Elephant. A place where plastic dinosaurs, crooked houses, steam railways, castles, and scary wax works all sit in a charming and unique way with a large number of old age pensioners and two very different music festivals. The Isle Of Wight Festival is a big mainstream beast which this year features the likes of The Prodigy, Razorlight and Neil Young. Bestival is the smaller, cooler, more eclectic festival set in the beautiful grounds of Robin Hill Country Park which this year hosts Kraftwerk, Massive Attack, Seasick Steve, Klaxons and Little Boots amongst its many attractions. Breaking More Waves chooses Bestival over the Isle Of Wight Festival every year, although this time we will be praying for dry weather following last years horrendous wash out.

Bestival is run by Radio 1’s Rob Da Bank, and it is his record label Sunday Best that have signed Lucky Elephant. The band are due to release an album this June. They will also be playing at Bestivals smaller sister festival Camp Bestival.

The bands sound, rather like the Isle of Wight, is unusual, eclectic, sunny and old fashioned mixing retro synths, tape delays, Wurlitzers, harmoniums, drums, ukuleles and guitars in a warm, sensual and beautiful way with wonderful heart grabbing French accented vocals supplied by Emmanuel Labescat. Breaking More Waves caught up with Emmanuel and found out a little more about the band. Emmanuel has an alluring use of the English language that adds a certain romanticism to the interview that also comes across in the bands music. Over to Emmanuel.

Tell us about Lucky Elephant and where you are from?

Half of the elephant is from the Isle of Wight, however a third elephant has also just moved to Ventnor, this beautiful little town in the very south of the pie. The home of the elephant is actually London, on Leonard Street, Old Street. Tall Paul, who plays the bass, runs Treacle Studios with a couple of other friends. It's a wicked place, really really not the traditional "studio" you can find in London - those places are awful - everybody who went to one of those big commercial studios knows that. You would have to pick a number and get in the queue it'd be the same. The home of the elephant is different, really low-fi, just a real and very inspiring place. Nick Cave and the Bad Seeds, and another big act too, don't remember the name, came down there because it feels like a place to play music. And they don't rob you too. Which makes everyone agree about it. We very lucky to somehow being a little part of this place. Personally, I'm coming from a town by the sea in the south west of France, on the Atlantic Ocean, very close to Biarritz. A little town called "Capbreton". It's quite famous for its surfing conditions, and for being a place where people for the major cities come and spend their summer holidays. In a way, it's very similar to the Isle of Wight if we consider the contrast between the busy summers and the long and empty winters.

What do you think, as musicians, are the benefits of being located where you come from ? And what are the bad things ?

I guess it depends where you come from. If you love playing music and you are coming from a place where people are very enthusiatic about music in general, with loads of live venues to go out and play or hear other people play etc etc...then why move? To be really honest, I'm not sure the place where you make your music has any importance, what really counts is where you meet the people you choose to make music with.

At Camp Bestival last year Breaking More Waves had a ʽfestival moment' when we saw you play. Your music was just perfect for the atmosphere. Have you had any ʽmoments' when you've played live? If so what were they and where were they?

Thank you ;o) . Camp Bestival was wicked! What a site that was!! From that stage we could actually see the sea! What a day. It was such a different concert to the other ones because the audience was made of different people, very different ages, and from that stage we were worried about all those little toddlers dressed up as little flowers, or lions or ladybirds , trying to stand on their feet while we were trying not too play too loud... Concerts are so different all the time. That's one of the very humbling things of making music. You never know how good it can be until you go there. One of my favourite gigs was playing at the Windmill in Brixton, for maximum ten people. We would have had more space on a Valentine's card, and there was hardly nobody there, but somehow it felt like everyone was having the best unexpected "moments" ever, on that night! You have some very cool moments, but also some very "special" ones -like having one of our harmoniums down on the third song of a set!! "Shit". ;o)

Talking of Bestival / Camp Bestival, how did you come to be involved with Sunday Best?

Sam and Paul have released an album in the early days of Sunday Best - under the name of "Boomclick", an album called Halfway Between. It's a lot more "produced" and different in a way to Lucky Elephant. I was lucky enough to have to sit next to Sam at work. That's how we met and then I met Paul, his mate from Boomclick. They took me to gigs, festivals, had really good fun. The good thing for me too was that i genuinely loved some of their music, specially songs like Must Have Been Crazy and Fire By My Side. I was very happy to be part of their gang, because I respected who they were as people. The bond with Sunday Best started from Boomclick, and it felt very natural for Sam and Paul once Lucky Elephant started to keep Rob Da Bank and Sunday Best in the loop of what they were doing.

Manu you are one of the most unusual and engaging front men we have seen in a long time. What is your approach to performing on stage ?

I naturally start by looking for the people who seem to be into our sound, it gives me a kind of trampoline to bounce upon! Then you become immerged into what you're doing on the moment. It'd be weird not to be...

Can you tell me a little bit about some of the sounds you make, as once again they are very unusual ?

First of all Lucky Elephant is kinda of a trio, because in the end it's three people playing instruments and someone singing. A trio always end up sounding bit different to more traditional set ups where you have a second guitarist, or an additional keyboard... I guess there are spaces that you can't fill, so it forces you to make the best music you can with what you have in terms of instruments available on the moment. The instruments are also kinda "vintage" as Sam plays an old wurlitzer, while Paul plays a Roland synth for the bass sound and a old Farfisa Pianorgan from 1964 that i bought originally for myself on Ebay!! Lawrence, who plays the drum, has been trained as a "jazz drummer" so he's as much into the rhythm/tempo than the tone of what he's playing. It's hard to say if he does it on purpose or if it's just totally natural, but he really approaches his drums like a piano.

We hear there is an album on the way. We're very excited about this, what can you tell us about it ?

It's very exciting. The album is called Starsign Trampoline and will be released on the 1st of June. It was confirmed just a few days ago. 2 tracks will be also released on I-tunes as a single on the 18th of May. The album has 11 songs, and each one of them took loads of care. And we also put loads of care into everything related to the album, from the beautiful artwork to the sound of the snare over this very chord - right there - listen!!... ;o) We had to drop some other tunes, not many, but about 4 or 5. Purely because we tried to put a collection of tunes together, to create something, more than just the "best" or more "catchy" or whatever tunes we had.

And are there plans for any more live shows ? We've yet to see you play at anything but festivals and want to see more....

We've spent most of the summer and autumn rehearsing the songs, recording and mixing the album. So we stopped playing live for three or four months. Since early January, we've been working on putting a new set together, and getting "stage fit" again as a band. Our first concert of the year was on the 7th of March at the Orange club in Canterbury and we were all really looking forward to it.

Woman in the Wall

Thanks very much !! That’s been a brilliant interview.

Here is a sweet little video from Lucky Elephant. It's a self titled instrumental that is just screaming to be used as backing music for something wonderful. Breaking More Waves highly recommends that you make Starsign Trampoline an essential purchase this summer.

I'd never heard of Lucky Elephant but these guys are good...have just listened to their Myspace. Thanks for the heads up.

I love his music, they make realy amazing music for me