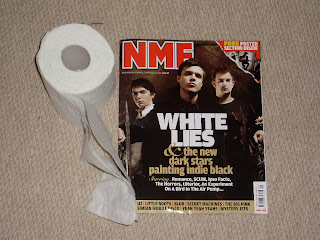 Our second email to the NME failed to be published again. We knew this wasn't going to be easy. We're in for the long slog. So this week we're on the attack....

Mark Beaumont spouts utter rubbish. According to him the BRITS are for people who don’t like music. Isn’t that rather insulting to the readership of the NME ? In 2008 some band called The Arctic Monkeys won 2 BRIT awards and then won 3 at the NME Awards. This year Kings Of Leon won 2 BRITS and an NME Award. Conclusion ? Well, it doesn’t take an idiot to draw one, so it shouldn’t even be hard for Beaumont.