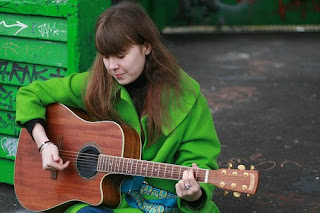 Building up to the release of her next fairytale folk single Over The Hill, the sweet and whimsical Alessi Laurent-Marke, better known as Alessi's Ark took some time out to play for the bandstand busking project. Often near forgotten and redundant, these ornamental structures are screaming out to be kissed with life by modern artists. Bandstands are spaces designed for music and performance, often having an exquisite elegance and charm, yet often they stand as circular empty ghosts.

A significant number of exciting artists have now played for the project including Emmy The Great, Frightened Rabbit, Blue Roses and Of Montreal. Alessi is the latest to sign up. You can see all of the performances, including further songs from Alessi here, but for now here is a version of her debut single on Virgin, The Horse.