The B Of The Bang - Alfred, Light The Fires 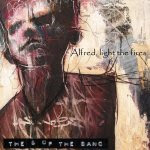 The B Of The Bang release their debut single Alfred, Light The Fires on Jellymaid music on 9th March. With the mainstream gradually reinvestigating the goth genre and the continued proliferation of the so called new folk scene, it is perhaps unsurprising that a single like this should come along. Alfred, Light The Fires is goth folk for the noughties. It’s a vaudeville freak show of a song set in a time distant place where typewriters and cherubs are still common language. Lead vocalist Christopher Whitear is the baritoned Victorian ringleader warming up for the greatest amateur dramatics show of his life, whilst underneath him pianos, acoustic guitars and accordions all find their place in this oddly structured tempo shifting song. Despite all of this unplugged music hall strangeness this single is oddly charming, with its beleaguered dickensian gravitas bringing a neatly formed melody. It’s like the Editors and Eighties Matchbox B Line Disaster out in a field, but it’s very much a field of its own.

You can purchase the single here and watch out for an exclusive interview with The B of the Bang at Breaking More Waves soon.