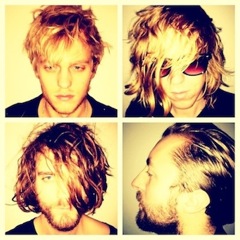 You might remember Swedish foursome The Concept who we introduced as a new wave back in January. The bands jubilant joy pop (not to be confused with the horrible and evil LOLpop) has been creating huge smiles wherever it’s heard. The band is tagging themselves as post-hipsterporn which arguably is not the greatest tag line, but we’ll forgive them when they’re making such exceptional pop music.
You may remember the song D-D-Dance, which is still available for download using the new wave link above. Now the band have issued a video for the track which was recorded crudely on an iPhone with a young boy called David as conductor. Warning; it contains flashes of nudity so may not be office safe. The Concept is currently recording a bunch of new songs in Sweden before heading to the USA where they say they intend to ‘live on air-thin-promises until the end of 2012.’

Get your dancing shoes on it's time to D-D-Dance again.
The Concept - D-D-Dance (Video)

Email ThisBlogThis!Share to TwitterShare to FacebookShare to Pinterest
Labels: The Concept