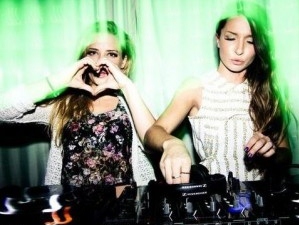 Our post last Friday featured some rather top Swedish pop with a song called D-D-Dance, so whilst we’re on a roll let’s do some more Scandipop with Rebecca & Fiona and whilst we're at it, let's keep the same song title minus the stutter as well.

Rebecca & Fiona have in certain quarters been labelled dilettantes, it-girls and scenesters. These  labels may or may not be fair but frankly we couldn’t care. If Peaches Geldof decided she was going to make a pop record and it was excellent, our perception that she’s an attention seeking Boomtown Brat wouldn’t perturb us. Because pop music is all about the end product of the manufacturing process; it’s like buying a car. If you bought an Aston Martin One 77 the chances are you’re not going to be questioning who actually made it - just that it's a great ride when you turn the ignition.

It explains why Sweden, a country that seems to really know and understand pop music in an intimate way gave Rebecca & Fiona a Swedish Grammy for Dance / Electro in 2011 and why fellow Swede Robyn had the two girls as tour support DJ’s on her tour. Their debut album I Love You Man also received plenty of positive praise.

Now Rebecca & Fiona are releasing a new single. It’s called Dance. It’s the best thing they’ve done so far. If this blog was a shopping list of music Dance would be marked essential. With pulsing stately synths topped with drifting feminine vocals it adds a more mature piece to their pop jigsaw. We like it.

Email ThisBlogThis!Share to TwitterShare to FacebookShare to Pinterest
Labels: Rebecca and Fiona