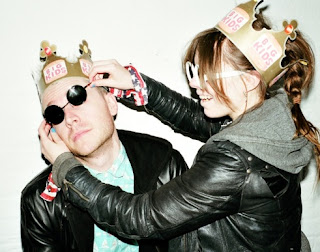 It seems like only yesterday when the likes of Florence & the Machine and Marina & the Diamonds were just the musical equivalent of toddlers, taking their first tentative wobbly steps into the world of pop stardom. The trend then seemed to be for every new band (or solo performer) to take its singers name followed by ‘and the’ something. A couple of others spring to mind. First there was Mr Hudson & The Library, who after his 2007 debut LP A Tale Of Two Cities dropped The Library, shacked up with Kanye West and had major pop success with Supernova. Then there was north London’s gold and glitter croaky soul voiced star in the making Rosie, the daughter of ex-Goodie and ornithologist Bill Oddie. Together with her band she was Rosie Oddie and the Odd Squad. Commercial success alluded Rosie and her gang but the indie-ska-pop of Cola Coka is one to hear if it didn’t grace your ears it back in 2008.

Now with Odd Squad kicked out of touch and The Library put on the shelf, Hudson and Oddie are no longer those musical toddlers; they’re BIGkids – and recently released their debut single – Drum In Your Chest. It’s a stupidly chew-your-face-off catchy earworm of a track with wonky rhythms, shimmying oompah funkiness and boy-girl vocals, accompanied by an equally fun flashmob in a car park style video. We can’t imagine anyone citing Drum In Your Chest as a classic in a couple of years, or even a couple of days, but we’ll leave that sort of analysis to rock purists and critics that don’t understand the joy of life that can be provided a hook and a bunch of crazy music. The fact that BIGkids have got Snow Patrol to mix the song would suggest they’re not bothered about critical acclaim either – although ironically Snow Patrol’s remix is damn fine – adding pulsing Moroder style synths to the electro carnival.

But before you write off BIGkids as just some silly side pop project, have a listen to their raw cover of I’d Rather Go Blind (using this link) and another song  Good For You (below), a late night soul ballad that suggests that if nothing else BIGkids will bring some diversity. Rosie Oddie may yet get her time in the spotlight. We’ll say it again – this music is FUN, and aren't we all really big kids at heart ?

BIGkids - Drum In Your Chest (Video)

Email ThisBlogThis!Share to TwitterShare to FacebookShare to Pinterest
Labels: BIGkids