In Defence Of Reading / Leeds Festivals 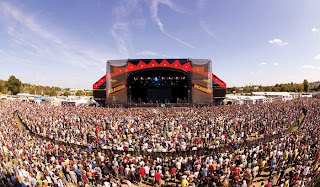 Yesterday evening the initial line up for the Reading and Leeds Festivals was released. There were no particular surprises; the gradually self-confirming rumours flooding the internet were 100% correct. Amongst the big guns playing this year are Kasabian, Foo Fighters, Paramore, The Black Keys, Florence & the Machine and one of Breaking More Waves favourite bands of all time The Cure.
Inevitably twitter was a flurry with opinions. Typical tweets we saw included “OMG my mum said if we can get tickets we can go to Reading Festival,” “Reading Leeds festival in August. Omfg! So excited!!” “I don’t even listen to music a lot, but I gotta say the line-up for this years Reading Festival is banging.” Others were a little less impressed. “Reading / Leeds – so predictable – so expensive – the festival has lost its soul.” “Probably an unpopular opinion but the Reading Festival Line-Up as it stands really is shit.”
One that particularly stood out for us was one from fellow new music blogger Leigh from Just Music I Like. Over three tweets he explained. “If anyone is thinking about going to Reading / Leeds because a few bands they like are playing…don’t. I made that mistake last year. The reality is that it is now a rite of passage for post GCSE / A Level students, which is fine, but it doesn’t make for a music festival, well a music festival for people who want to enjoy music. If your idea of a festival is incessant chatting and bladdered teenagers, go ahead.” We fully agree with Leigh, it’s one of the reasons why we stopped going to Reading a long time ago. The festivals atmosphere is well documented across the internet.
So why is this post called In Defence of Reading Festival?
Let’s use an analogy. When most people, usually in their teens, become fans of music they normally start somewhere near the mainstream or follow someone else’s tastes. They hear commercial pop music on the radio or songs that their older brother or sister or friend is playing and become enamoured with that. Then as the years go on people either let go of music as the core of their life (with  work, families and other pursuits taking over)  or develop increasingly more complex and niche tastes as they explore music further and further. It’s the same with festivals.
Most peoples festival experiences start at major festivals, be it Reading, V, Glastonbury, T in the Park or the like. They attend because their friends are going, because when you’re young and haven’t had the opportunity to see many live gigs the lure of big names can be incredibly exciting. They become as Leigh stated “a rite of passage,” for teenagers, many of whom will in a few years’ time stop going to festivals or will cultivate deeper and more subtle tastes in the type of festival they like. It’s certainly what has happened to us. It’s why these days the only major festivals (40,000 + capacity) we would think about attending are Bestival and Glastonbury - they're the only big ones that tick our boxes holistically.
We’re glad there are festivals for teenagers to go to and drink themselves silly, have unwashed off their heads sex with strangers and not give a flying fig about the music as long as they could say ‘they were there’. It’s part of growing up - developing experiences which may shape their tastes for the future. It’s hard to imagine when you’re 17 and just want to get off your tits and scream at your friends whilst a band is playing, but as you get older you may want something very different from life and that you may think about music in a different way. But until that time maybe it’s better that all the people who want that smashed, druggy rite of passage are put in the same field just off an industrial estate in a Berkshire town. At least then it gives the opportunity for organisers to manage it properly with a known audience demographic and the rest of us can enjoy the other festivals.
That’s why we will continue to defend Reading and Leeds Festival's. Just don’t expect to see us there.

Campsite At Reading 2009
Posted by Breaking More Waves Blog at 08:30

Though I'm not wild about the line-up this year I am a particular fan of the Reading fest. It was attending it in 2010 that inspired the start of SGTMT.

I've always been a fan of Reading, the taste in a music has always suited my own.

Leigh makes a good point but there are few fests that you can fulfil a boyhood dream by watching someone like Rage Against the Machine and then the next stumble across Friendly Fires in front of a few hundred people at 2 in the afternoon.

I doubt I'll attend this year but I hope to get back there in the future (though not to camp, I'm no fool).

Thanks for the comment Matt. I'm glad you enjoy Reading and continue to do so.

As a past Reading regular I'm glad the festival exists. It's an important event on the UK festival map, for many reasons.

Great point - definitely true that Reading festival has become a rites of passage festival, but really, if it wasn't this, it would be something else (such as camping in Newquay).

I stopped going for the weekend as a music fan (as opposed to working there) a decade ago, yet living in Reading, I've now come to the conclusion that if you can't beat 'em join 'em, and headed down last year for the whole weekend and had a great time. I think Reading is a festival you have to go to not expecting too much musically. I had such a good time I'm heading down again this year (but nope, I wouldn't camp at Reading!). The line-up isn't great, but theres always something - looking forward to Metronomy and Blood Red Shoes.