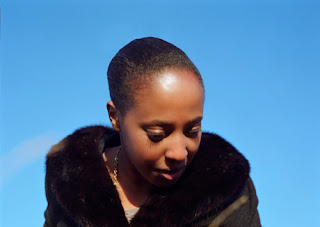 Soulful singer Cold Specks releases her debut album I Predict A Graceful Expulsion on May 21st with a new single Blank Maps to precede it on May 14th. However before that comes this brand new taster entitled Winter Solstice. A piano chimes, heavy drums thump, then horns and a male choir bring the whole thing to a near crescendo, but the earthy restraint in the vocals mean that the song never fully explodes, adding to its majestic Deep South weightiness. Al Specks, the singer of whom Cold Specks revolves round has named Sister Rosetta Tharpe as an influence and that becomes very clear as she sings this song.
If like Breaking More Waves you are based in the UK Cold Specks has confirmed two dates in London on June 19th and 20th at Hoxton Hall and slots at No Direction Home, Latitude and End Of The Road festivals so far.
Cold Specks - Winter Solstice
Posted by Breaking More Waves Blog at 08:30

Tah for the heads up for this Robin.