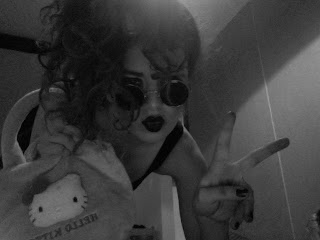 One of the problems of publishing a new music blog that works fully outside of the music industry itself (excepting the huge pile of emails from PR companies that attempt to sink our in box every day) is that we can never be fully sure as to when an artist is going to be forthcoming with recorded material. Back in November 2009 we first featured the flamboyant teenager Charli XCX and her hyperactive sherbert-electropop. A year passed and as November 2010 arrived we gave her consideration for our Ones to Watch for 2011 list. Have a look at this blog and the picture to see some of those we considered and eventually decided against. The decision not to list Charli XCX was probably correct as it is only in the last few months that she’s fully surfaced from the darkness of the studio, releasing two singles, the classy electro-power ballad of Stay Away and the igneous Nuclear Seasons with its call of “When you go, please don't leave your love in the sun, my heart will melt away.” Both have found plenty of blog adoration, particularly stateside. There now seems to be a momentum behind Charli XCX and hence this year she features on our Ones to Watch for 2012.

Charli XCX may have burst out like an exploding cracker, showering Pac-Man power pills whilst playing at being a crotch grabbing horned up pop star, but her two recent singles display a much greater maturity. They veer between 80’s power balladry last seen when the likes of Berlin or Shakespeare’s Sister were in the charts and the more modern pop of the likes of Marina & The Diamonds or Gwen Stefani dabbling with computers in a cathedral. With an album finally set for 2012 these singles have shown great potential. The question is can it be fulfilled?

Email ThisBlogThis!Share to TwitterShare to FacebookShare to Pinterest
Labels: Charli XCX, Ones To Watch 2012