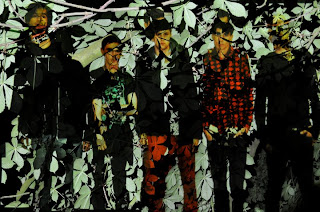 Our thirteenth choice in our Ones to Watch 2012 list is Outfit. They’re a five-piece indie band, but not the sort of indie band that is likely to quote Oasis or The Kaiser Chiefs as inspirations. In fact their Facebook lists their influences as Beach Boys, Pional, Todd Rundgren, Cryptacize and Kompak as reference points. There's a number of indie bands taking more interesting reference points at the moment -Embers (who we would have included on this list if it wasn't for the fact that it's so early days they haven't even played a gig yet), Zulu Winter, Woman's Hour, French Wives and Theme Park all nearly making it onto our Ones To Watch list, but we've gone this time with Outfit.

Having formed from the ashes of another band called Indica Ritual and various members having played in a whole host of other groups, Outfit first popped up on the internet 9 months ago with the songs Every Night I Dress Up As You and Killer. These two pieces of ambling, gentle, oft-kilter guitar tuneage immediately picked them up coverage on a music industry connected blog and pretty soon after the NME were on their case as well.

From that point onwards Outfit were on a rise and luckily they have the music to back it up. Their key track released to date is Two Islands, which floats in a vibey melancholic majestic beauty that seems to be going nowhere but is actually very focussed on its direction. There’s a feeling of sad loneliness in a packed space in the lyrics “I don’t know anyone else in here,” as guitar effects wash and keyboard sounds roll. With Outfit’s fluid structure and slightly avant-garde approach to song writing it’s inevitable that the band would draw comparisons with the likes of Wild Beasts and that has been the case. It’s not a bad comparison to draw.

It’s still very early days for Outfit, the band suggesting that they will release a new EP to follow up Two Islands in 2012 and a confirmed tour in February that opens at the Green Door Store in Brighton on 11th February before hitting Oxford, Bristol, Leeds, Glasgow, Manchester and Birmingham, with an album later in the year. Keep an eye (and ear) out for them.

Email ThisBlogThis!Share to TwitterShare to FacebookShare to Pinterest
Labels: Ones To Watch 2012, Outfit