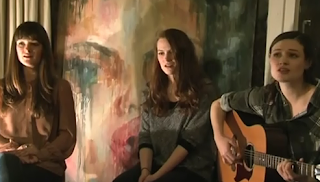 The Staves are three beautiful sisters making beautiful music. It’s music formed out of simplicity – one acoustic guitar and three harmonised voices that are about as close as you can get to pure. The word spell-binding doesn't even do them justice.

Jessica, Camilla and Emily Staveley-Taylor originally hail from Watford, UK and after starting their life in music playing open-mic nights and gigs in local cafes and pubs they secured a slot at the Glastonbury Festival back in 2009. Since then the band have found doors slowly opening for them as people recognise their undisputed and unique talent. In the summer of 2010 they were a part of the Communion records Flowerpot Takeover, during which they collaborated with Lissie, Mumford and Sons, Jesse Quinn, Pete Roe, Tim Rice-Oxley, and Damien Rice. They have also supported Mumford & Sons on a tour of the US and James Vincent McMorrow in the UK.

Originally featured on the blog back in April the sisters have now secured a record deal and an album will be released in 2012. If that album sounds anything like the beautiful Mexico which streamed on that April post or this bewitchingly calm version of Gone Tomorrow recorded live at Cecil Sharp House in London, it wouldn’t be a surprise if it finds itself on quite a few end of year lists come next December.

Gone Tomorrow by The Staves

Email ThisBlogThis!Share to TwitterShare to FacebookShare to Pinterest
Labels: Ones To Watch 2012, The Staves