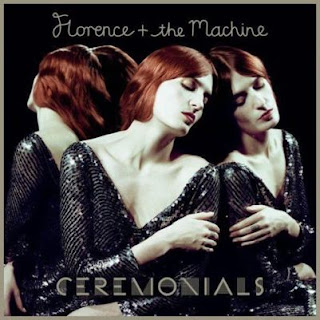 Back in 2008 when Florence & The Machine appeared in the Breaking More Waves Ones to Watch for 2009 list we suggested that Florence Welch was likely to go on to have some commercial success but was probably a little too eccentric to achieve mainstream popularity. Fast forward three years on and Florence & the Machine can be found appearing on X-Factor - which really is as mainstream as it gets. We were both right and wrong at the same time.

What is quite incredible is just how deep Florence has embedded herself into mainstream culture in the UK without ever really compromising what she does. Her second album Ceremonials is a gloriously bombastic piece of work that takes elements of her debut Lungs (namely Dog Days Are Over and Rabbit Heart (Raise It Up) ) and expands them into a colossal sounding record, that’s almost too big and too grandiose. Ceremonials is the album for getting tipsy on red wine, running into a wild forest, ripping your clothes off by a lake and dancing in the rain with the beautiful people.

Whilst Ceremonials is huge, it works because in amongst the vast string arrangements, church bells, choirs, heavy impact drums and over-the-top dramatics there are tiny moments of subtlety and most importantly, some great songs. Shake It Out, apparently inspired by a hangover is everything a Florence & the Machine fan could want; a big chorus, hooks, passionate vocals, sticks that slam against drums with violence and a windswept panoramic production that is breathtaking, yet it starts with a gently rising organ sound and Florence singing a gentle lullaby. Likewise What the Water Gave Me, with its concept of children who are swept out to sea, and their parents go in to rescue them, is certainly no derivative shake-yer-booty-in-da-club attempt at singles chart compromise and continues to assert Florence as the queen of the colourful crazy goth-hippies. Ceremonials is an album full of songs similar to these, feeling like the logical conclusion to what was started on her debut album.

It’s an album that is fan pleasing without compromising who or what Florence is or does. Those who dislike her music and think she wails like an evil harpy, will only have their beliefs confirmed further, but those who loved Lungs (as we did) will have little to turn them against Flo either. The big question now is where will Florence go from here? Surely the peak of the sonic mountain has been reached and new musical landscapes will need to be found. That may prove more problematic for her.

Email ThisBlogThis!Share to TwitterShare to FacebookShare to Pinterest
Labels: Albums of 2011, Florence and the Machine