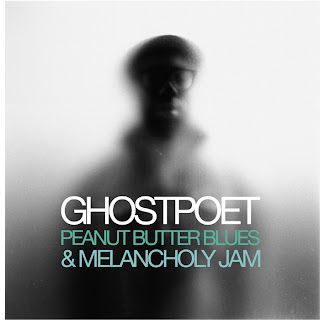 Back in April we said of this album “We’re taking a punt here but it really wouldn’t surprise us if Peanut Butter Blues and Melancholy Jam picked up a nomination for the Mercury Music Prize later this year. There’s also a fair chance it’s going to crop up in our own end of year Top 10.” Our punt was right on both accounts.

Ghostpoet’s debut album is a very British, very untypical rap album. As Obaro Ejimiwe raps on I Just Don’t Know “Other MC’s want to talk about crime, but that ain’t me.” Instead Obaro’s languid stream consciousness delivery takes on subjects such as the thoughts of a lonely 44 year old man whose life hasn’t worked out the way he hoped it would (Survive It) and feeling sorry for himself hangovers (Cash and Carry Me Home) with a world-weary, philosophical approach over d-i-y, laptop created electronics and beats. It would be easy for the record’s downbeat delivery and lyrical themes to feel pretty depressing, but because of Ejimiwe’s softly spoken ‘just get on with it’ approach it ends up feeling uplifting and is incredibly engaging.

Peanut Butter Blues and Melancholy Jam is one of those rare things in music – an album that stamps its own identity on the map yet feels as welcoming and comfortable as something you’ve known for ages.

Email ThisBlogThis!Share to TwitterShare to FacebookShare to Pinterest
Labels: Albums of 2011, Ghostpoet