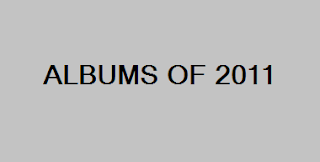 For the next ten days we’ll be running down the Breaking More Waves blog top 10 albums of the year.

What this top 10 list isn’t is a comprehensive analysis and consideration of every album that has been released this year. If you want to see what people who spend all day listening to music and analysing it to decide if it’s ‘good’ or ‘bad’ think are the ‘best’ albums of 2011 then visit the critics end of year polls. Most of these polls have been decided by a committee of journalists and therefore the eventual outcome smooths out the individual quirks, likes and passions of each individual as the albums with the most votes rise to the top of the pile.

Breaking More Waves is fan journalism. This means those quirks, likes and loves of the author / fan can be displayed brutally (and beautifully) on the internet, warts and all. This list isn’t a ‘best of’ list. It can’t possibly be. We’ve heard only a small handful of the hundreds / thousands of new albums that have been released this year. Our list represents all of our prejudices as a fan, it's formed through our emotional connections not only to the music, but the artists as well. For example a critic might write off Britney Spears latest album immediately because it’s in part flat generic pop music. However if you are a fan the chances are that when halfway through Femme Fatale the quality drops a little (ok, a lot) you’ll forgive her because it’s still Britney and Britney is amazing, full stop.

Of course that’s not to say that this list is simply a list of our ten all-time favourite bands that have released albums this year. As fans we can also be massively disappointed – love isn’t always blind. But the reality is that this is a list of favourite rather than best of albums that we’ve heard this year. We’ll be posting about one album each day until we reach our favourite at number 1.

So how have we chosen our top ten ? We've applied a little bit of musical mathematics. Our top 10 albums have been selected on three criteria. First, and most importantly, the musical quality and emotional connection - the critical judgement part. Second the number of times that we've played an album this year, divided by the number of months it has been since we first heard it. The theory here is that if an album is really a favourite we'll play it a lot. We've got the play counts figures from our Last FM page, which doesn't represent all of our listening, much of it having been done on CD players away from Last FM such as the car, but it gives a reasonable impression. Thirdly the fan factor - as we described with our Britney example. We've gone to extraordinary lengths to apply these three criteria, putting each one into an excel spreadsheet and listing every album we've heard this year that we think is good, then weighting each factor to give a score. So the musical quality is 55%, the number of times played is 30% and the fan factor is 15%. The output is our top 10 albums.

If you’re interested in what’s moved us this year, check back each day for the next ten days.

This year has seen a number of releases by artists that have featured in past favourite albums lists on the blog - from Bon Iver (our favourite album of 2008) to Florence & The Machine (in the top 10 in 2009). How do they fare in 2011 ? And what of some of our Ones to Watch from last year ? Only four of them - Clare Maguire, James Blake, Misty Miller and The Vaccines actually got as far as releasing an album - are any of those in our Top 10? And what of artists we've got excited about on twitter this year ? We've given a lot of love for Nicola Roberts, but her album flopped commercially. Could she make an appearance or was our love for Girls Aloud's finest just a passing one night stand ? To date her album has only cropped up on the Guardians top 50 albums at number 38 but of course pop and dance music very rarely finds goodwill from the critics.

We’re not asking you to agree with our choices, feel free to disagree or comment on them if you want, but never say that that we’re ‘wrong’ because these are the records we’ve connected with. This is personal.

Email ThisBlogThis!Share to TwitterShare to FacebookShare to Pinterest
Labels: Albums of 2011