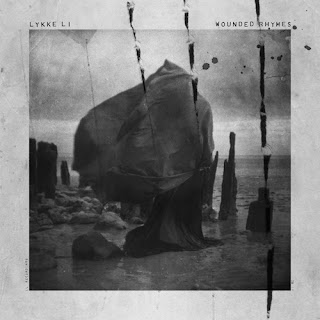 Back at the end of 2008 we named Lykke Li’s debut album Youth Novels as our seventh favourite of the year. In 2011 the follow up Wounded Rhymes crops up at number nine. Written in LA in early 2010 and recorded at Atlantis Studios in Stockholm, Wounded Rhymes is an album of shadowy pop songs that owes some debt to Phil Spector but never sounds fully retro. Retaining in part the rhythms and percussive beats of her debut, Wounded Rhymes finds Lykke Li heading off into different corners of fantasy and reality, her vocal sounding stronger, full of outwards confidence and yet also more melancholic and vulnerable. From the girl-gang sexy arrogance of Get Some with its chorus of ‘like a shotgun needs an outcome, I’m your prostitute you gonna get some,’ to the Dusty Springfield referencing torch song Sadness is A Blessing, Wounded Rhymes is an album that has at its core ten well-crafted songs filled an abundance of melodic and lyrical dexterity.

Whilst the main subjects of Wounded Rhymes, that of unrequited love, heartbreak and the pain of bruised and broken relationships clutter up the halls of pop music like old ladies queuing at a jumble sale, in 2011 almost nobody took these themes and handled them better than Lykke Li, except that is for one other person - more of that in a few days time.

Lykke Li - Love Out Of Lust

Email ThisBlogThis!Share to TwitterShare to FacebookShare to Pinterest
Labels: Albums of 2011, Lykke Li