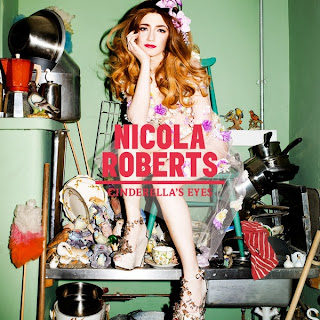 Cinderella’s Eyes is the best pop album of the year by a country mile. After the artistically redundant failures of Cheryl Cole and the wasting-floor-space-of-Tesco middle of the road rubbish that was Nadine Coyle’s record, it was left to the ginger princess to demonstrate that sometimes a solo effort can produce something as good, if not better than the group together. Cinderella’s Eyes may have been a commercial flop but it’s an intriguing, confident and quirkily engaging album.

From the word go Cinderella’s Eyes sets out its stall with Beat of my Drum. Dealing with how at the age of 16 Nicola Roberts went from being just a normal kid from Halton Brook estate in Runcorn to being in one of Britain’s biggest girl bands via the TV show Popstars: The Rivals and how uncomfortable, unprepared and out of place she was. “Once upon a time I press rewind, two left feet I had no beat, baby in the corner learning quickly, keep up, keep up,” she sings explaining the steep learning curve she experienced. From that moment on we’re allowed a fascinating, voyeuristic and often upsetting look into her life with Girls Aloud. “Too young to by my own bottle of vodka, so I’d beg the driver please I need another, funny that I was too young for many things, yet you thought I’d cope with being told I’m ugly,” she pipes on Sticks & Stones. “Never been wrapped up in the way I look, so when I got down to London, had the press on my case, coz I didn’t walk round with a smile on my face, called me a rude ginger bitch and say I bought bigger tits, they’re gonna eat all their words, their talking absolute shit,” she spits on Take A Bite. This is Nicola Roberts 2011; defiant, a little analytical, brilliantly angry and having come through the process, a pop outsider ready to take on the world – bang to the beat of her drum indeed.

Whilst this insight into Roberts world may be fascinating, without the songs, you’re hardly likely to come back. This is what sets Cinderella’s Eyes apart. In a world full of beige and LOLpop this is pop at its best – it’s often brilliantly oddball and fearless in its attempts to not mimic the likes of Katy Perry, Rihanna and the like. Whether she’s grappling with Diplo, Metronomy or The Invisible Men, the songs are full of vocal hooks, exuberant classy synths and grab your balls beats and lots of weird ‘where did that come from’ moments of sound that make you want to go back and investigate again. Witty, catchy and just a little edgy Cinderella's Eyes shows how good pop music can be if it dares to jump off a cliff into the depths now and then.

Email ThisBlogThis!Share to TwitterShare to FacebookShare to Pinterest
Labels: Albums of 2011, Nicola Roberts

Glad to see Nicola getting the recognition she deserves here for the record even if it didn't sell well.

Really thought this was going to be 1st the way you go on about her on twitter. I'm going to listen to the album tonight just to try and understand why you like it so much.