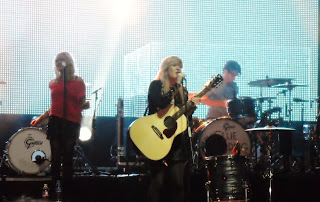 Ellie Goulding possesses star quality, but not in the hugely overwhelming sense that so many of today’s modern pop crop do. There’s no performance art costumes, no hugely powerful vocal, no over inflated ego. Gaga, Florence or Kanye she is not. Admitting that she misses her home town “where nothing ever happened,” and appearing astonished at the size of the audience, which she describes as “insane,” Goulding is a star because she’s the slightly awkward-girl-next-door-turned-good that every teenage girl in the room screaming her name can identify with. She represents the hopes and aspirations of the ordinary and is evidently thankful for her success; at one point in the show a huge screen shows a film of Goulding, with her spoken words announcing how grateful she is, how all this has happened to just a normal person.

Yet Goulding is not normal – she has talent that puts her a long way from the middle of the bell curve. It’s an ability to write simple, honest, hooky songs and a sweet wispy vocal that flutters and floats over whatever she plays; from the electronic dance pop of Lights and This Love (Will Be Your Downfall) to the lampshade lit solo-acoustic mid set interlude of boy-hating The End. It’s the simplicity of these quiet moments - just a girl, a guitar and some emotions, the kind of emotions everyone feels - love, hate, fear - that work the best. “I would give my life to be human,” she sings later on new song Human, and irrespective of her artistry you have to wonder if maybe Ellie would prefer to be at home with a cup of tea, her songs and a cosy duvet rather than all this pop star shenanigans.

This is not to say that Goulding’s endearingly real and pure character on stage means that she’s not capable of a bit of showmanship when required. The set opens with her at the back of the stage, beating out the opening rhythm of Under the Sheets with fervour on drums. Later during her pleasurable but hardly inspiring John Lewis approved cover version of Elton John’s Your Song she sings the line “this one’s for you,” whilst pointing at the audience, eliciting big screams from the excitable pit. For the encore and Starry Eyed she even gets a bit naughty-girl sexy, hip-grinding and shaking her booty across the stage.

Success has brought an increasing confidence to her performance– she’s gone a long way since she first played to a half empty basement in Brighton just over a year ago (here). It’s been a golden year for Goulding.