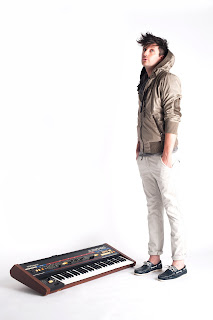 Way back in April we posted a blog that asked the question Whatever Happened to The Modern? Their glamorous vamped up electronica was so out of step with the times, yet The Modern found an audience and strutted romantically into the charts for a while before everything went pear shaped.

Seven months later we can give at least part of an answer to the question. For Ex-Modern member Nathan Cooper is now solo under the name of Kid Kasio. Don’t be confused - Kid Kasio is nothing to do with Norwegian electro-pop ensemble Casio Kids, although musically he’s not so far distant; as his self-explanatory strapline on his Twitter states ‘I make synthpop!’

A clue to the type of keyboard kickers that Kid Kasio makes can be found in the picture above. Compare and contrast it with this cover art (here) from another past electronic pop wizard and you’ll see a striking similarity. White background, hands in pockets, turn-ups and keyboard on the floor – we’re talking quintessential mid 80’s referencing synthtopia – not in reality that far removed from what The Modern used to do, Kid Kasio certainly hasn’t gone shoegaze or chill wave.

Apparently there’s a whole album recorded, but for now we’ve heard just two songs – both of which you can find below. Living My Life references Steve Winwood’s 1986 top twenty hit Higher Love with its opening synth riff doing a warped line in mimicking the songs hook line. It’s not difficult to envisage it being passed off as a distant cousin of Popjustice favourites Bright Light Bright Light. Better than this though is Not For Turning, which makes us want to don oversized shoulder pads, legwarmers and a pastel jacket before dancing to the funked up pulses of electro-disco groove that owe a debt to the mid 80’s sounds of MTV videos, the Thompson Twins, the Brat Pack, Chaka Khan, Georgio Moroder, Thomas Dolby’s Hyperactive and Smash Hits. In terms of self-confessed influences his Facebook suggests that he is informed by Hurts, La Roux, Duran Duran and Mirrors, which regular readers of Breaking More Waves will know puts him in high regard in terms of our own synth-pop preferences.

Kid Kasio can take you back to the future – it’s a sparkling and electric place to be. Why not join him ?

Living My Life by kidkasio

Not For Turning by kidkasio
Posted by Breaking More Waves Blog at 12:01