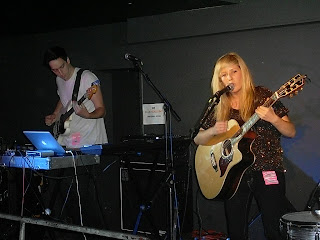 Since we first posted about Ellie Goulding back in February 2009 here , the Hertfordshire songstress has been a busy girl. Uploading haunting covers of Bon Iver and Passion Pit on Myspace, a big NME feature in August, getting blogged by Perez Hilton in September, dirty dancing on the brilliant juddering synthtastic floaty, dub step disco Jakwob remix of Starry Eyed, wrestling with a vacuum cleaner for Popjustice (honestly) and then finally topping it all signing a major label worldwide record deal. Come October Ellie will be supporting Little Boots on tour and when December rolls drunkenly in we fully expect the name of Ellie Goulding to appear on the better Ones to Watch / Sound of 2010 lists.
But despite celebrity blogs and a host of golden producers ( Starsmith, Mark Ronson, Frankmusik) working with Ellie, when it comes to playing live shows an audience has still to be found. The small basement venue of Audio in Brighton is less than half full, but then this is to be expected with Ellie yet to officially release any material and little promotion of the gig.
The songs that Goulding has posted so far on line have been full of studio trickery; electronic dance pop folktronica production, sweetly polished with girlish delicate vocals that have elements of Cerys Mathews, Stina Nordenstam and Bjork in them over tunes that subtly grow on you with each listen. How such arrangements could be transferred to the live arena is a question that until this first show with her new band has been unanswered.
The answer is simple; it takes just the opening number Guns And Horses, for Ellie Goulding to convince Brighton that she is a viable live proposition. Halfway through the song there’s a moment when the music drops off, Ellie sings the line “I see your face in every star,” the crowd woops, drums kick back in and we feel spine tingling goose bumps. If there were any doubters in the room, Goulding banishes them. No question, this is exhilarating stuff.
Playing as a three piece the tiny Goulding is highly charismatic in her performance. She may be pint sized but she has big stage presence, playing and singing with raw potency, even if she is almost dwarfed by her huge acoustic guitar. The disjointed tricky electronic laptop beats from the studio are replaced with forceful live drums and occasional distorted synth pads, whilst Starsmith adds keyboard sounds, electronic cleverness and guitar. The sound is gutsier than one would expect, Ellie Gouldings’ voice impassioned, the live drums blistering and uplifting. This is certainly not just an exercise in coffee table nicety, but fervent and exciting music underlain with Gouldings distinct songwriting ability. The mid tempo groove of forthcoming single Under The Sheets with its chant of "We're under the sheets you're killing me," is instantly likeable and Myspace favourite Starry Eyed is blissfully exciting. Only Wish I Stayed doesn’t quite work, its live version a little too scrappy and lonely, missing big washes of electronica.
Towards the end of the set Ellie ditches the guitar and pounds along on a single drum in front of her. The rhythm was perfect and so was the timing. And talking of timing this young singers time must surely come soon.
Posted by Breaking More Waves Blog at 00:01

Have been reading lots about Ellie Goulding recently. Its refreshing to read something about her more than just the "Yeah she's great you should check her out." Great blog and having read some more pages of your sh*t you obviously care a lot. Keep up the good work.

Checked her Myspace the other day and you're right. I wonder how it will translate live.

Would definitely go see her if she played in London.

i wanna see her starry eye.

did she play NOT FOLLOWING YOU- thats my fave!

Love Ellie ! Thanks for a great review. Wish she would come to the states. And the clip is cool as well. So jealous of you.

Sorry guys - I've deleted the live footage. Ellie sent me a message asking me if I wouldn't mind taking it down - she wasn't happy about the quality. It wasn't my clip though so it may still be on You Tube.

NME are reporting that Ellie G's March 2010 tour is her first headlining tour. (She's playing Brighton again then) If so what was this gig, was she a support act. In March she is playing at Digital, I wish I had known about this show. Damn those who were there.

No. NME got it wrong. Ellie headlined this gig - it was one of several low key shows she played prior to the Little Boots support tour, prior to the hype kicking in.