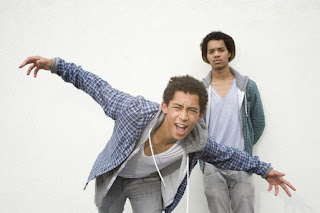 Here’s a confession. Over our years of being a friend of music we’ve built up a considerable knowledge of indie, synth pop, folk and a variety of other genres. But when it comes to hip hop, r ‘n’ b and such like we’re still very much novices. So here’s a question. Does not having great knowledge mean that you can’t critique something? Isn’t it more important perhaps that you are able to say if something moves you, irrespective of reference points, comparisons and technical terminology?

Thankfully Brighton’s Rizzle Kicks allow us to champion them even with our lack of knowledge and also because they move us, not in a deep emotional way, but they put a sunny smile on our face. Because their cheekily charming blend of old skool hip hop samples plenty of tracks that we instantly recognise – from the Arctic Monkeys to M.I.A. It’s fun, engaging and cockily compelling. What’s even better is that in the ska fondled Down With The Trumpets (video below) they have a potential bona fide hit single under their wings.

Rizzle Kicks consists of two vocalists / MC's Sylvester and Rizzle. They attended Brit School - but don’t let this affect your judgement. Their tracks are about teenage life. They have a mix tape that’s floating around the internet – you can download it from here. Grab it and then watch Down With The Trumpets and see if you agree that this track sounds like a hit in making.

I saw them at the Hurstpierpoint Festival a few weeks ago. Their album you can download is, well a bit hit and miss.
It seems like they take to much sampling. But they do have a lot of talent and they pick fights like twins trying to be better then each other.
Im defo going to see them again!

Interesting comment Sam - I hadn't really thought of them as a live act - more a studio / bedroom sampling collective.

Mind you I can imagine putting a decent band behind Down With The Trumpets (my favourite song) and it working.