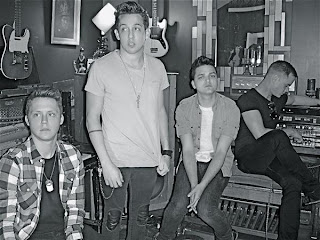 Fundamentally all we want with the world is for everyone to love each other, get naked and roll around in happiness together. Embodied somewhere within our brain is a thought that says we wish we had been a teenager in the 60’s; free love and flower power are concepts we could have embraced wholeheartedly.

However we live in 2010 and the idea of saying to our friends ‘let’s all take off our clothes and dance around in the moonlight,’ is only likely to lead to a life of social exclusion; because somewhere out there, to paraphrase Cheryl Cole, there’s a fight fight fight fight fight for this love and the thing that’s fighting is called hate. We have very little hate, particularly musically, but the little we do have is at least forty per cent saved for Kings of Leon. We’ve never been of the opinion that “yeah, their old stuff was good, but now they’re just dull and mainstream.” No, we’ve been more of the opinion that “every song they have ever written is like sitting on the toilet whilst watching your grunting, sweating, balding dad masturbate in the shower.”

So when we first heard that new 50’s styled rock n roll band Mona from Nashville, Tennessee sounded a lot like Kings of Leon, we gave them wide dad rock berth. But here’s a dichotomy, because although the Sex on Fire lads make us want to commit murder, we’re not fully averse to stadium rock. We’re going to say it once, and then quickly move on, but we actually really like U2.* There – did we get away with that? Just to clarify we like most U2 but the majority of Pop is so-so and nearly all of No Line On The Horizon sounds like a band who have lost it and are trying desperately to find it again. So when we read that Mona also displayed some of the good musical qualities of U2, albeit they lacked a lead singer who sometimes dressed as a camp devil called Macphisto who liked trying to save the world we thought we’d give them a chance.

The verdict? We find ourselves fighting with ourselves in a contradictory melee, pounded by the bands buzz of ringing guitars and punch the air energy that at one moment sounds pretty damn exciting and the next moment sounds like a band that have been watching dad masturbate in the shower a little bit too long. But that’s OK, because it gives balance, which is what Mona’s debut single Listen To Your Love was about. "It is basically a song about dualism. The push and pull... Your love or your lover? Sometimes those two things are combative, other times in sync," said lead singer Nick Brown of the track to the NME. "Same with all things whether it's faith, fighting, love or hate. Balance is always the key and always the challenge.” Mona are certainly challenging us with that balance.

Have a listen yourself and let us know your thoughts. We’re off to dance in the moonlight with friends to Cheryl Cole. The bands second single, Trouble On The Way is released mid December and the video streams below.

*Footnote we also like Glasvegas and the first album by Stereophonics, which Mona also remind us of a little. Sorry to those who find that offensive.

listen to your love -MONA by MONA-
Posted by Breaking More Waves Blog at 16:45

Email ThisBlogThis!Share to TwitterShare to FacebookShare to Pinterest
Labels: Mona

The only man in Wales not in love with Kelly Jones said...

This band has been around for a long time, sure different names, different backgrounds, different songs and the same nme hype.

Just so familiar, didn't get it the first 100+ times and still dont.

Ps, Yes the Stereophonics first but no to Glas vague ous

oh no, far too many references to cheryl cole in this entry! was hilarious though. and quite disturbing...