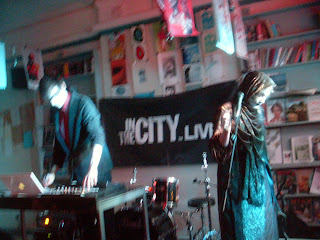 Having first featured the artily cool electronic pop duo Labyrinth Ear here and then witnessed their first ever live outing at Manchester’s in the City here, it’s time to bring more music from Emily and Tom, and this one is their best yet. Navy Light is one of the tracks from their debut Oak EP, which you can download for free from here. The EP features the two tracks we blogged previously, namely Snow White and Lithium, of which Snow White in particular has been receiving a lot of love.

What we still can’t get over is that Labyrinth Ear come from London rather than Berlin or Warsaw. The Labyrinth Ear LDN sound is not the sound of sweaty lager washed toilet venues or even hedonistic club culture, but what futuristic architecture formed from steel, concrete and glass would sound like if it was music rather than a design and built construction form. Here's Navy Light.