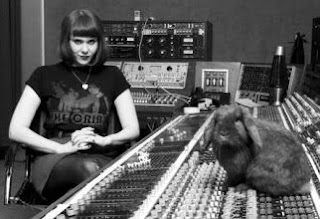 We’re nearly there. We can draw a collective sigh of relief because another year of music blogging is almost done. With just our ones to watch for 2011 and our albums of 2010 lists to go throughout December, it’s time to sit back and recall some pleasant memories, because despite the title of this blog, there's been very little to be angry about.

Then on January 1st we'll announce a few minor changes to the blog (one of which - The Music That Made Me feature has already been announced ) and then away we'll go again. But first let's cast our eye over our blogging year from January to June, the rest follows in twelve hours time.

As the snow in the was still melting away and our country was slowly grinding back into productivity we enjoyed Warpaint’s song Elephants (here) from their Exquisite Corpse EP. Then we had to wait till late autumn before their album finally dropped. Although the critics generally raved about it, it left us feeling a little disappointed compared with this earlier work – there’s one we can strike off our end of year list for starters. Likewise the Beach House album got all of the critics smouldering with glee but our review (here) was less positive, the record leaving us feeling “foggy and empty.” Possibly for the only time ever on Breaking More Waves we featured a song that would become synonymous with Joe McElderry – Donkeyboy’s Ambitions (here) – an unhealthily infectious piece of fluoro-pop that later in the year McElderry would cover and disappoint many of his teenage fans with. Probably the most sense we talked all month was in an essay on When Popstars Haircuts Go Bad (here), suggesting that Kate Nash’s new hairdo (see the picture above - she's the one on the left) may signal a creative and commercial failure for her forthcoming album.

February saw two of the best gigs we witnessed all year – Hurts at in and Stornoway at the Komedia in as well as the first appearance of a band that we began to fall in love with on the blog called Let’s Buy Happiness (here). Seven months later we had the pleasure of putting the group up at our house when the band played our home city - and they turned out to be a very polite bunch of whipper snappers.

As spring began to warm things up a little in March we got on the blog bandwagon and wrote about buzz band Cults a number of times. (Such as here) Sometimes when a record is so immensely enjoyable you simply cannot ignore it. We also enjoyed Ellie Goulding’s debut calling it a skilful and highly enjoyable contemporary pop album (here), but much of the blogosphere and critics didn’t agree, distancing themselves from an artist they had once supported – seemingly it was too pop for most. By the end of the year critical support was probably the last thing on Goulding’s mind – over 300,000 sales in the seemed to suggest that she had the public on side. Elsewhere our worries over Kate Nash’s new haircut were confirmed at possibly the worst gig we’ve been to this year, (here) which left us feeling rather sad, Nash having previously been one of our favourite young female singers. And it would also be a sin not to mention Out of Time by NewIslands which we called amazing, no A.M.A.Z.I.N.G (here), and as a result developed a whole new catchphrase for ourselves.

April saw us getting our first ever internet exclusive review with our piece on Stornoway’s Beachcomber’s Windowsill (here) and a bucket load of hits, Unicorn Kid’s Dream Catcher pumped us up with heavy and dirty arcade machine excitement – one of our singles of the year (here), and Kate Nash’s album wasn’t quite as bad as expected, being a mixed bag, giving us some hope that if her label doesn’t drop her, we still may find something to love again, if only she’d get a decent hairdo once more (here).

Ignoring the UK general election, in the same way that Nick Clegg ignored almost everything he had said before the result was revealed, May was all about urban festivals with both the Camden Crawl and Brighton’s Great Escape keeping us on our toes (too many links to show all of the reviews, instead just click on May 2010 in the blog archive) – although both were to play second fiddle this year to Manchester’s In The City in September which 100% revitalised itself to be a superb urban new music event with no queue’s anywhere and a great selection of bands. We also talked a little bit about family friendly festivals (here) events that often make non-parents cringe until they actually become parents and then see the world in a different way.

As summer arrived we tried to avoid the World Cup as much as possible, but our resistance was futile, eventually posting the genius that was Mr B the Gentleman Rhymer’s World Cup Song (here) on the blog. Mr B was just one of the characters that we came across at the Wychwood Festival this month (here) alongside a pre I’m A Celebrity Shaun Ryder mumbling his way through a Happy Mondays greatest hits set. Some of the new acts that we featured in our new waves posts this month included Spark (here), Visions of Trees (here) and Lite N Dark (here). Oh, and we reviewed A VERY LOUD ALBUM by the band Sleigh Bells (here).It was indeed a treat.

Here’s just a small selection of the bands we mentioned for your listening pleasure, including a couple of tracks for your download. Wasn't a bad first six months was it ?

Out Of Time - Active Child Remix by NEWISLANDS

Part 2 of our round up will follow later. Twelve hours, same place, let's make it a date.