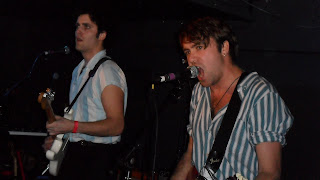 Cast your eyes across this weeks UK top forty singles and album sales charts and it’s very easy to draw the conclusion that as a commercial force, rock music and in particular new indie rock music is commercially obsolete. Back at the start of the year we asked the question of what had happened to the fashionableness of its sound (here) and our conclusion was that for the time being it was out for a long lunch and possibly dessert as well.

Most of the 00’s saw UK record labels falling hand over fist to sign the latest bunch of lads with guitars in their hands and songs in their hearts. The lineage from The Strokes to The Libertines to The Arctic Monkeys to the fallout that became known as landfill indie is well documented and since then pop, r ‘n’ b and X-Factor have dominated.

This weeks singles chart features only one predominantly guitar based band – My Chemical Romance – at number thirty one and there are less than ten guitar based LP’s in the top forty – most of which are re-issues or recordings by older established acts such as The Beatles, Bon Jovi and Ray Davies.

So when The Vaccines – a band who have been much blogged, championed by the NME, Radio 1’s Zane Lowe and featured on the BBC’s Later With Jools Holland programme – take to the stage at Brighton Audio, it would seem grossly unfair to accuse them of selling out and doing things purely for commercial gain by choosing the route of rock ‘n’ roll oblivion. Such accusations would seem even harsher when consideration is given to their lead singer Jay Jay Pistolet (real name Justin James Hayward-Young). Pistolet was once associated with the new folk scene that has spawned the commercial successes of Mumford & Sons and Laura Marling. The last time we came across Pistolet in Brighton he was supporting those two plus Noah & The Whale just a few hundred yards down the road in a university theatre, yet with The Vaccines he seems to have musically turned his back on the genre – preferring something else based in tradition – but this time a tradition that harks back to rock 'n' roll from yesteryear with reference points being The Strokes to The Ramones to The Beach Boys.

Having bagged the prestigious fourth on the bill slot of next years NME tour, a slot previously held by the likes of Coldplay, Kaiser Chiefs, Florence & The Machine and The Coral and a high chance of featuring on the BBC’s Sound of 2011 list, The Vaccines star is rising and now there’s a hint that gritty, raw indie rock ‘n’ roll could be starting a new fashionable and commercial ascendancy. Maybe Justin's choice of change of musical direction wasn't quite so unsavvy and unfashionable after all.

Discarding the sales figures and hype, the question that is on everyone’s lips is “are they any good? Does the art back up the hype?" The answer is partly, yes, but partly no. The Vaccines are a blast of bawdy, primal, driving guitar work that owes much to the aforementioned Strokes and their first album. Visually they look a little like a bunch of 50’s preppy US college kids as well as a hint of Doherty and Barat of The Libertines in their heyday when they occasionally jostle for stage position and rub against each other playfully. It’s easy to imagine a number of the fuzzy tunes they play tonight being hollered out in celebration by drunken men at summer festivals – particularly Reading or Leeds. They have some cracking titles for songs; Post Break Up Sex and Wreckin’ Bar (Ra Ra Ra) sound like classics before you’ve even heard them and the results are vigorous shots that recharge the batteries of the worn out Brit indie guitar brigade. However one of their problems, like many new bands that are thrust into the limelight, is that they simply don’t have that many songs to play yet and the songs they do have are all largely similar. “We don’t play for long so you won’t be here late,” Justin announces from stage.

But accepting that such things are almost inevitable for a new band then The Vaccines have enough growling edge, layers of noise and bounce-a-long guitar guts to stick two fingers up at the last few years of music and turn things back into reverse direction. Whether this is a good or bad thing and whether it’s just an example of rock music hitting middle age and creeping towards its pension book only punters and future history will be able to decide. For now though, The Vaccines are surfing the wave - the splash they made in Brighton was enjoyable enough - without soaking us through.

Email ThisBlogThis!Share to TwitterShare to FacebookShare to Pinterest
Labels: The Vaccines