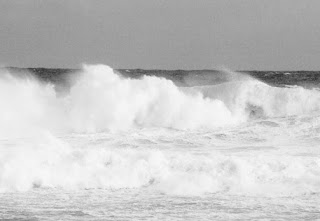 The continuation of a blog looking back at our year, with a picture of some waves, for no other reason than this blog is called Breaking More Waves. There's hundreds (well ok at least ten) reasons behind the name....

As summer unfolded we managed to get away from geeky laptop blogging and out into the countryside for some superb summer festivals – possibly our best year ever in terms of outdoor live music. Latitude in Suffolk made us gush at newcomer Clare Maguire (here), long term stayers The National (here)and old timers James (here again), albeit the festival vibe was somewhat ruined by reports of rape on site. We also fitted in one day of the Mediterranean heat of Lounge on the Farm festival (here) and spent most of our time avoiding the sun in a sweaty tent curated by Moshi Moshi and Wichita. Elsewhere, we discovered that a Pitchfork buzz doesn’t necessarily lead to well attended gigs when we went to see Memoryhouse (here), one of a number of gigs we’ve attended on our own – something we wrote about in a well-received piece (here). Having already seen the Pains of Being Pure at Heart at Latitude, they buzzed our brains in Brighton to finish the month of nicely (here). Oh and we got the first of two quotes from our blog this year in the Guardian New Band of the Day Column (here) when we wrote about the lovely Still Corners (here) An endless summer would have been quite perfect.

Things slowed on the blog in August whilst we were away on holiday, but we still managed to fit in Camp Bestival, which in its third year running was a resounding success and scooped Best Family Festival at the UK Festival Awards. (Read the full review by clicking on August 2010 on the blog archive). We also discovered great new music from Trophy Wife (here) and Paper Crows (here), the later getting our second Guardian New Band of the Day quote (here).

September found us as blogger turned DJ, playing a crazy opening set at Bestival, as the gates opened in the Big Top. We did it together with members of a newly formed collective known as The Sunday Best Forum All-Stars - in fancy dress. (Video clip here) It wasn’t all about camping and cider though, we enjoyed just the cider in our hometown for Southsea Fest, a one day multi-venue festival which included great sets from Revere, Islet, Run Toto Run, Let’s Buy Happiness and Bright Light Bright Light (here). We also got hot under the collar for Clare Maguire, about whom we first posted in 2009 and finally got to hear some of her finished material (here). The Breakage remix of her single was awe inspiring as well (here). We also discussed the perfect length for an album and suggested that music bloggers have a role as critics.

Manchester was our final destination for festivals in 2010, with In the City coming up trumps in terms of multi venue / single wristband events with phenomenal performances from the likes of D/R/U/G/S, (here) Let’s Buy Happiness (again) and Clock Opera (here) to name just three. Other highlights of October were James Blake’s (not to be confused with James Blunt – a terrible error to make for which the death penalty should be reintroduced) continued rise with the breath taking Limit To Your Love (here), Clock Opera’s Once And For All (here) and Hurts and Clare Maguire gigging together – a musical marriage that should it be consummated would have produced the most amazing children (here) And talking of amazing, we also wrote a response to Rawkblog’s 2010 Bands You Can Ignore list, entitled Why Not Being Amazing Is OK (here). In what was a good month musically we also gave coverage to some very under the radar bands such as Alpines (here), The Retrospective Soundtrack Players (here) and Labyrinth Ear (here) in our New Waves feature.

Which leads us to the here and now; November is at an end. We’re about to start publishing our ones to watch for 2011. Those expecting plenty of unknowns will be disappointed we suspect – in the majority of cases our list will be a summary of much of what has gone before on this blog, with just the odd newbie. More on that tomorrow. There’s been some pretty decent new stuff this month though that didn’t get on the list – Duologue (here) and Breton (here) in particular have all been licking our ears tenderly (or harshly in some cases, but it’s still been pleasurable.) Our Breton piece also gave good advice on the best way for a couple getting intimate to remove a bra and avoid the awkward schoolboy fumbling moment - we like to think we provide a service in other respects besides music blogging. If there's anything else you'd like to know just ask - we know the secret to making great mashed potato for example. All in all we’ve posted a significant amount of new music on this blog this year – as we said just a few days ago, maybe there's too much new music (here). It’s an ongoing debate.

Right are you ready for some lists? We are…

Here's a couple more tracks from some of the bands mentioned in this post. Get your ears licked.

The Pains of Being Pure At Heart "Heart In Your Heartbreak" by Slumberland Records
Ones to watch 2011 are ready to roll.
Posted by Breaking More Waves Blog at 12:01