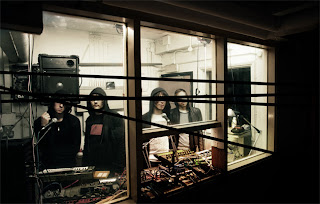 One of the biggest clichés for any music blogger is to write the words ‘here’s something that landed in our in box today,’ so please accept this overly long sentence as some sort of wriggling avoidance of that cliché but also at the same time acknowledging that is exactly what happened. What we’re trying to put across like a fumbling schoolboy trying to remove his girlfriend’s bra for the first time is the fact that sometimes even the coolest new music blogger (which thankfully we aren’t, we’ve said it before and we’ll say it again, cool is transient, music is fashion and the day you become cool is the day you are probably on your way out) isn’t actually out there all the time watching bands on the bottom of a bill of 5 acts in a grotty pub or scouring newly set up Myspace pages for the latest and greatest new talent. No, sorry to spoil any illusion you were under, but sometimes music bloggers, when they’re not sucking the cock of PR companies just open stuff in their email in box, listen to it, think ‘that’s good’, and post it.

PS: Girls, to avoid the fumbling schoolboy syndrome, and to actually look sexier, remove the bra yourself with a cheeky smile on your face - it's better for everyone. Win win.

Email ThisBlogThis!Share to TwitterShare to FacebookShare to Pinterest
Labels: Breton, Sound Of Rum, The Temper Trap

I've always struggled with the bra. Big yes to your top tip.