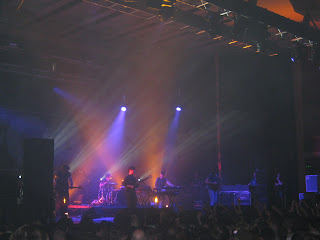 There’s a moment during Foals set at Brighton Dome where lead singer Yannis takes an athletic run and launches himself off the stage and into the crowd. It’s a leap of confidence that you can also hear on the bands second album Total Life Forever, which picked up a Mercury Prize nomination and saw them creating one of the singles of the year in Spanish Sahara.

These launches upwards and outwards are conveyed in every sense in their live shows – from the eager sold-out anticipating crowd, rammed with teenagers and young twenties down the front who demand the band with shouts and handclaps even before they take to the stage, to the groups arresting and sonically expansive songs that fill the Dome with intricate guitar work, a sense of space and oddball indie disco rhythms. It’s compelling stuff and shows a band growing and loosening up in every way, yet never compromising.

As the teenage girls on shoulders and fisting pumping lads bounce towards celebratory oblivion, older more sedate audience members could consider possible musical resemblances to The Cure. Yannis howls and yelps with intensity on some songs and whispers in near falsetto gentleness on others against guitars that funk and chime in equal but different doses. It creates the same kind of mesmerizing atmosphere that Robert Smith and co used to be able to create, and occasionally still do. However Smith probably wouldn’t display the same levels of showmanship that the Foals lead singer does; as the show climaxes with a huge sounding Two Steps Twice he mounts the speaker stack and from there journeys onto the balcony with guitar in hand much to the delight of the audience. At another point he emerges from the side of the venue and walks his way through the heaving crowd back to the stage.

Foals have bloomed into a composed, musically self-assured band that is now beginning to display hints of greatness. If they continue to progress at this rate they could soon be arena bound.

Email ThisBlogThis!Share to TwitterShare to FacebookShare to Pinterest
Labels: Foals

Cool post, I saw Foals a couple of months ago and loved it. Realy nailed it.