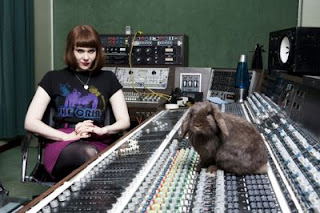 Those who have followed Breaking More Waves in its younger forms before it became just another music blog on the internet, will know of our obsession for all things Kate Nash. Yes, we fully understand that there are as many haters of The Nash as there are lovers, but we have been firmly seated in the ‘We Heart Nash’ camp. We’ll even go as far as admitting that we wiped a small tear away when we heard that she had gotten all cosy and hugged up with Ryan out of The Cribs. You know, the one that once declared “The mainstream attitude of indie bands today is a bigger problem than global warming.” Just try telling that to a polar bear.
However with news beginning to spread that The Nashers second album is being readied for release ( and no we are still referring to Kate here rather than a band - although if you live in London you can see Kate play in a real band - a side project called The Receeders - tonight in Hoxton), a wave of panic has set in. Why ? Because the once sweet and charming Nash, all vintage clothes like your granny used to wear and just-got-out of-bed-but-I-still-look-kind-of-sexy red hair has been replaced by a look that we can only describe as robo-indie meets child of Satan. It’s not good. We celebrate change, as creative complacency is dull, but it has to be good change. Just to make it clear. This. Change. Is. Not. Good. Full. Stop.
In the recently taken picture above not only is Kate committing the cardinal sin of wearing a tee-shirt of her boyfriends band, but she sports a haircut that is really not befitting of her.
Which leads us to ponder a hypothesis. When good artists (assuming that you think Nash is a good artist) change their hair, do they go bad ?
In a completely unscientific piece of research (carried out over a 48 hour period with the assistance of Popjustice - see here) the results show a clear correlation. For instance take Bono. Ok, his haircut has always been bad, but as the mullet gave way to long lankness and then baldness set in the music got gradually worse. The Human League were unarguably at their best during the period of Phil Oakey’s asymmetrical haircut and the Dare album, but once he had shaved it all off it went horribly downhill. Another synth pop wizard Howard Jones had a string of Top 20 hits with a spiked up eighties hairdo, then the hair went flat and so did his music. Alanis Morissette cut her hair off, and her record sales plummeted. And of course when Deborah Harry went brown it really was the end. Blondie ? Pah. However sometimes the shift to blonde doesn’t really work either in terms of musical output or commercial success. Just ask Sophie Ellis-Bextor or Shirley Manson from Garbage.
So the evidence does not bode well for Nash. Of course we would never be so shallow to go off someone just because of their haircut, although there is no doubt that the haircut in pop music is part of the package. From punk to pop, from new wave to new folk, the haircut of a musician says something about the character.
We’d never just judge a book by a cover, and will always open up and read inside, but as fans of The Nash, right now we are very concerned about what she is going to deliver in 2010. We shall be watching and listening with interest.
Posted by Breaking More Waves Blog at 00:01

Never thought we would see the day where you would slate the Nash. I almsot feel sad for you.

I'm confused... why is The Nash (of whom I'm not the hugest fan, though Foundations and Birds are both lovely) seemingly disguised as Rosie Vanier who was, until recently, of "and the Goldbug".

Thanks anon. Hope you shed a tear for us.

What?!! I love the hair and the new vampy look. You boys and your love of twee boho girls!!

I still think the Adam and Joe Kate Nash songs are my favourite though ("Bums and Binge Drinking"); )