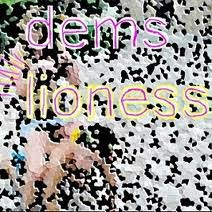 Dems is a one man musical project by one Dan Moss a 23 year old who has recently moved from Edinburgh to London to focus on making his d-i-y indie laptop extravaganza’s with samplers, guitars and oversized synths. His debut release Jarndyce vs Jarndyce released in May (which you can download for free from his Bandcamp here) was a twitchy piece of electronica that wormed its way into the brain, and he’s followed this up with a rather brilliant new track called Lioness which sets off down a similar path to Active Child with falsetto vocals gift wrapped with all sorts of electronic trickery. Where Dems differs from Active Child however is that his music is less smooth, less choral and has a certain sharpness to it. For anyone that has ever heard the more experimental output of Baby Bird, you may find some similarity.

Dems may only be at the embryonic stage at the moment - we understand that he has yet to play any live shows – but from what we’ve heard so far there’s some emergent talent here. Dems has a huge box full of musical ideas. We’re looking forward to opening it a little more.

You can get Lioness below, grab Jarndyce vs Jarndyce from his Bandcamp (he currently has no Myspace – but let’s face it for music fans it’s all about Bandcamp and Soundcloud these days) and get his remix of Mopp’s Dream About You from this blog, in our previous post.

Lioness by dems
Posted by Breaking More Waves Blog at 12:01

Email ThisBlogThis!Share to TwitterShare to FacebookShare to Pinterest
Labels: Dems