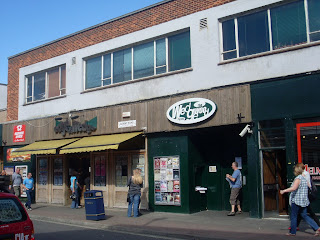 When you list famous musical cities it’s unlikely that the words Portsmouth or Southsea will crop up. Too close to London and lacking the artistic bond of Brighton, Portsmouth has always been the UK’s south-central second rate cousin in terms of music. Portsmouth may possess a small but thriving grassroots scene, the hub of which is Southsea’s Albert Road area, but the size of the place, the lack of quality small music venues (the Wedgewood Rooms excepted), combined with the lack of vision and entrepreneurial foresight of many (but not all) local bands and promoters means that Portsmouth often exists in its own little pond, where even the smallest fish can seem like a shark.

Yet last Saturday Portsmouth put itself a little more on the musical map, with the annual event that is Southsea Fest. It’s a multi-gig, multi-venue one day festival where one wristband allows access to everything. It enabled Portsmouth to look outwards as well as inwards, showcasing a significant number of up and coming national bands as well as the talent that lurks within.
There was a slow burning buzz of anticipation for Southsea Fest 2010, more so than similar events in other towns, particularly since the addition of Pulled Apart by Horses who by all accounts played a sweaty and messily fun gig at the tiny café sized Edge of The Wedge. This was a case of Portsmouth’s musical backwater status working in its favour – many of those attending were proud that Portsmouth was putting on such an event – there was no resigned ‘seen it all before attitude’ and good weather helped build the upbeat vibe. Southsea Fest had a d-i-y feel to it, staff mainly being volunteers - which led to a few venues running behind schedule - but nobody seemed to mind.

“Do you ever wake yourself up shouting at yourself?” asked Ollie from Oxford three piece Ute, beginning their lunch time slot in the Edge of the Wedge. Ute were the perfect wakeup call – complex arrangements and intricate rhythms that veered from shouty acoustic thrashes to desolate pastoral pop. Add in Ollie’s comical sense of storytelling – at one point he explained his ‘Pin-up’ labelled belt was purchased yesterday after his old one broke whilst eating pizza – and Southsea Fest delivered a pleasing start to the day.

The Edwardian elegance of the Kings Theatre, with its Italian Renaissance décor and high ceilings played host to four bands who dealt in similar sonic architecture – tunes that filled the space with their expansiveness and occasional bombast. Three of these gropus hailed from Portsmouth and its environs – but it was Londoners Revere who really excelled.

The words “All roads lead south,” sung by The Dawn Chorus seemed highly relevant for the festival. Their mix of acoustic and electric guitars, mandolin, accordion, keys, drums and a trumpet player who at one point blasted out his sound from the balcony had moments of tenderness, passion and melancholy. With a drummer who provided a rabble rousing impersonation of Frank Turner on the uplifting Carnivalesque, The Dawn Chorus filled the space of the Kings Theatre with that good old fashioned virtue of excellent musicianship.

Revere raised the stakes even higher. With their chartered accountant attire of black waistcoats and smart clothes this eight piece played incredible widescreen sculptures that built to huge crescendos like Sigur Ros with more guitars or Mogwai with more strings. Backed by projections of grey landscapes and balloons floating skywards, their music also aimed for the stars, full of sweeping strings and transcendent noise. Words such as euphoric, cinematic and majestic came to mind. This was a band who really knew how to fill the tall space, the power of The Escape Artist virtually lifting the roof off as the projections flashed up the words “Fade out of sight, step out of the light.” Powerful and masterful Revere were utterly incredible.

The B of the Bang had a virtually impossible act to follow. Thwarted by a technical hitch where a spilt bottle shorted out some equipment, the band struggled bravely on, but their sound seemed low-key after Revere. They finally hit their stride with a new song The Forest, the result being a bassy grunge-funk groove that seemed to merge 70’s Starsky & Hutch rhythms and Eye of the Tiger by Survivor into something new. Requests from the audience for the missing Alaska led to boos when it couldn’t be played because of the gremlins in the machine. “Just because we’re in a theatre doesn’t mean this is panto,” responded lead singer Chris Whitear before managing to get the electronics working so that the song could be played out.

There’s a military, chest banging, call to arms exuberance to The Strange Death of Liberal England, and this was taken one step further in the Kings Theatre, with an orchestra, marching soldier drummers parading down the aisles and air raid sirens played from the balconies. It was big, a little ridiculous and visually entertaining. Lead singer Adam Woolway’s parrot screech of a vocal was neatly juxtaposed against the bigger orchestral moments – his passionate rasp fighting solo against the orchestra on A Day Another Day, but it didn’t sit comfortably with everyone in the audience, the back rows of the stalls slowly emptying as the bands performance continued.

From the opulence of the Kings Theatre, over the road at The Loft – a grubby worn out pub, Manchester’s Cats In Paris did their very best to confound the indie kids with a set of genre bending oddness. Keyboards that sounded like rock guitars, violins thrown in from nowhere, jittery song structures and a lead singer that could do a good job as a Huw Stephens double act. Schizo-pop strangeness of the craziest order.

Run Toto Run continued the Manchester assault, although in this case it was full of darker jerky synth stabs, breathy feminine vocals and quirky but loveable song structures. Occasionally it appeared the boy-girl-boy three piece wanted to step out and make a big commercial dance-pop song, but are just a little bit more comfortable in their own non-conformity to do so. Run Toto Run are a band who have fully made the transition from sunshine folk tweeness to dark electronic pop eccentricity – the smooth sultry sounds of Out of Order and other new tracks banishing their old singles to the trash can. It will be interesting to see where they go next.

Fresh from their first ever London gig the night before Newcastle’s Let’s Buy Happiness played to a fairly small Southsea crowd. Lead singer Sarah Hall beckoned for the audience to come closer and the band won punters over with their utterly beguiling beauty. Spacious layered guitars formed soaring soundscapes with Sarah’s delicate Cocteau Twins referencing vocals caressing the ears. Let’s Buy Happiness made a compelling case for being your new favourite band with the songs Dead Legs, Six Wolves and Works Better On Paper all confirming their ability to create indie music that is graceful and elegantly ethereal.

From chiming indie to 90’s influenced synth pop, Swansea’s Bright Light Bright Light showed exactly why they’ve recently been signed to the new Virgin funded Popjustice Hi-Fi Label. Gracious melodies, gorgeous smooth vocals and hooky as hell choruses that got drunken girls dancing; they provided an exciting and welcome respite for those who found the likes of Pulled Apart by Horses just a little bit too intensely masculine. Ten out of ten for the way lead singer / keyboard player Rod Thomas assertively but politely replied to one drunk girls question of “Do you do cover versions?” He really doesn’t need to do covers when he’s got a case full of glitzy high-fiving pop monsters of his own such as Love Part II which shimmied to the dance-floor with its jubilant call of “I’m in love again.”

In a bizarre, but quite possibly brilliant piece of programming the act to follow Bright Light Bright Light was Cardiff’s Islet. With not one ounce of melody Islet charged straight into the audience with a rhythmic based core of yelping, growling, screaming and unhinged racket. How a band can be quite so rubbish and yet terrifyingly brilliant is perplexing. They really are exporters of the avant-garde and the extraordinary. Taking instruments off stage into the crowd, straining war cries off microphone, using the walls and implements of the venue as percussion to hit plus on the spot jogging, Islet blistered with energy, challenging ideas of what entertainment, art and performance are about. Who cares what the songs sound like? This is a band to experience, not sit at home and listen to.

With Islet having provided one of the most fascinating performances of the day, Southsea Fest 2010 had provided a rich tapestry of eclectic new music for a bargain price.

Nice to read a review of bands I didn't see at Southsea Fest except TSDOLE who I caught a bit of Was good times though. Bit hungover today :)

Great review. Really enjoyed this years Southsea Fest - the best so far - even if it was 1 in 1 out at the Edge of the Wedge and I missed Pulled Apart by Horses.

Strange Death for me were a bit Marmite - I was one of those at the back who left halfway through.