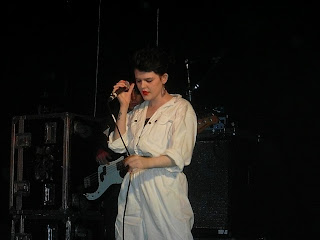 There’s a strong argument that pop music is cyclical. Stylistic change is inevitable in order for the products survival. Yes, we use the word product deliberately - forget the idea of music as a pure art form, once it’s offered up for sale it’s a product as much as cans of baked beans are.

The latest fashionable sound ‘goes out’ rather than ‘wears out.’ It’s why recently you may have noticed an opinion shift in the media and some blogs whom in the past have gurgled with dizzying excitement about the emerging waves of colourful female pop stars, but now offer a weary yawn for the next girl-wave hitting our headphones. After Florence, La Roux, Lady Gaga, Lily Allen, Ellie Goulding and Marina & The Diamonds, there’s a sense of ‘not another one,’ every time another new potential lady pop starlet is unleashed on the world – a sign of one stage of the cycle beginning to end perhaps? Of course female is a sex not a genre, but in a very male dominated industry, females are often marketed and treated as a genre, leading much of the non-thinking public to define these acts by the same generalisations.

So whilst the cynics huff and puff every time a new act – be it Florrie, Sunday Girl or MNDR – arrives on the scene, the music industry continues to push female pop girls from the perspective of what it sees as a ‘genre’, because just like the skinny jeaned boys with guitars a few years back, major labels can still have commercial success with these artists – even if there’s a distinct possibility that it’s a law of diminishing returns, creatively at least. Witness the transition from The Strokes, to The Libertines, to The Pigeon Detectives. Over saturation of the market and the requirement for change will find that at some point the tide turns for the pop girls, with only the most creative - those willing to embrace the change - able to survive.

Which brings us to Walthamstow’s Spark - real name Jess Morgan. She’s another brave pop wannabe who we’ve featured a number of times on Breaking More Waves since back in June. If pop music is cyclical then certainly Spark is evidence in point. With initial releases on small boutique pop labels (single Revolving is due on Neon Gold in November) before a major release on 679 records, her route to mainstream accessibility is taking the same strategy as label mate Marina & The Diamonds last year. It wouldn’t surprise us if we see a fair build up in publicity leading into 2011 for Spark – the BBC Sound of List could well be a target.

But for all of this talk of marketing strategies, product survival and lazy genre definitions, the most important thing – the one thing that matters above all else – is the answer to the questions - “Is the music any good? Does Spark engage with people? Does she have the talent and the songs?”

Stepping on to stage at Hoxton Square Bar & Kitchen dressed all in white Spark looks like a street-girl painter and decorator ready to answer our question. Yes she is talented, yes she can sing, and yes she’s got a bunch of songs that can deliver her some mainstream success if things go her way. What she doesn’t have yet though is any core emotional resonance. This is well drilled polished pop music, with a hint of soul and drama, but there’s no huge passion, nothing that fully pulls at the heartstrings. Of course the same could be said of much music in the charts. It doesn’t have to be life changing and deep, sometimes to entertain is good enough. From her innocent marionette jerky poses during the infectious schoolgirl Paloma Faithisms of Revolving, to the opening Blondie-esque pump of Shut Out The Moon, to the lovely melodies and quasi-operatic “Oo-oo-oo,” hook on Damage Done, there’s certainly enough here to give pleasure.

With these songs Spark is hardly likely to change the world, but she might just make someone’s day a little brighter. That will do for now.

Email ThisBlogThis!Share to TwitterShare to FacebookShare to Pinterest
Labels: Spark

This is crap. You don't know what you're talking about. Spark is amazing.

Just giving an honest opinion. It's not right or wrong. Just an opinion.

"You don't know what you're talking about," seems to translate as "I don't agree with you."

The world would be a boring place if everyone thought the same. Were you at the gig by the way ?

Yes was there. You're opinion is full of shit.

"You're opinion is full of shit."

And your use of the apostrophe is quite creative.

You think you are so clever. Spark has more talent than you will ever have. I bet you can't even play an instrument.

I actually agree with this blog post.
It's an opinion piece on a blog, I don't think you'd kick off this much if it was written in the Guardian. Nothing like taking criticism gracefully.

Look, I expressed an opinion. I honestly don't think it was as negative as you seem to think. I enjoyed the gig - it just didn't move me. It was just a fun evening with a good singer and good songs. Simple as that. But I didn't find Spark (as you did) amazing. Just good.

Sorry if my opinion upset you - but we live in a world where freedom of speech is vital, and to only write sycophantic "this was amazing" reviews would detract from the blogs credibilty.

I believe readers value blogs that are honest with their opinions - even if they don't always agree with them.

Freedom of speech my arse - leave reviews to the pros who know what they're talking about. You're just a humble shit for brains blogger who knows fuck all.

I disagree with the statement that I "know fuck all". I've been producing fanzines (and now this blog) for over 15 years, I've attended 1000's of gigs - I know what moves me musically and what doesn't. Just because you don't agree doesn't mean "I know fuck all."

I am sorry if this review upset you - I tried to provide a balanced and objective piece. If you check back you will see I have supported her in many of the other articles I have written and still think she is very good. I have also supported her by getting her songs played on the radio show I am involved in.

However this blog is not one of those blogs that just writes sycophantic reviews of everything - a fundamental attribute of all the blogs I like is that they are objective and give opinion (positive and negative) in order to help their readers make selections on the vast quantities of music / gigs that are out there.

I would still recommend going to see Spark live, but from my perspective wouldn't expect a life changing / heavily emotional experience - just a night of polished entertainment. You obviously disagree.

If you want to make comment further please feel free to do so, but I will not respond any further as I think this 'debate' has gone as far as it can.

Go wank yourself with a bar of soap

I actually fully agree with the comments about using gender as a genre and whilst I think Spark is alright, she's never actually been that interesting or exciting to me.
I think BMW is spot on with this assessment.

Loved this girl for a while now, I was at the gig and though she was generally amaze I thought there was definitely something missing. As for the anonymous poster please go and stab yourself in the eye with your misused apostrophe.

As much as I would love to vent my fury upon the inane gibbering of "anonymous" - I will just calm myself and comment that many professional music writers started off on web-sites similar to this. Just looking at the NME alone; Kev Kharas, Jack Shankly and Laura Snapes could all be put in that category. So anonymous' sage suggestion that reviewing should be "left to the pros" was, in fact, and somewhat ironically, "full of shit".

Luckily for Mr / Mrs /Miss / Ms Anon there's no chance (or desire) of the writer of this site ever working toward professional journalism, aside from the fact I'm not good enough, I already have 2 professional qualifications and a professional career in a field far away from music journalism. Breaking More Waves is very much a hobby.

But you're right Phil. Many journalists cut their teeth with blogs, just like years ago, before blogs existed people like Steve Lamacq wrote fanzines (as did I).

Now I liked Spark, I think “Revolving” is a great pop song. From the review here I can ascertain that Robin likes her too, but he presents a balanced, objective post of the show which to me reads "enjoyable, with potential

There's certainly nothing here which seems to merit Anons invective unless they are either mad or have a vested interest. But hey what do we know? We are just 'humble' bloggers, we know nothing. Our opinions are invalid as we are not paid to have them, unlike say Jeremy Clarkeson, who has outrageous opinions to a deadline, every week. ©Stewart Lee

Looking back on this review half a year later I am still very happy with what I said, and it seems that most people got what I wrote. Anon didn't.

6 months on and as yet Sparks possible potential has yet been realised. As Popjustice suggested a while back, I suspect she's going to have to work really hard to get any sort of commercial success right now.