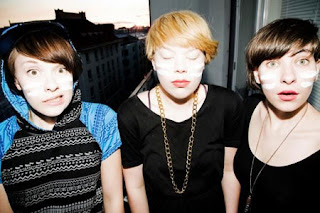 Le Corps Mince De Francoise consist of Mia, Malin and Emma and are the new crazy stomping scamps from Finland. This is a band for fans of Robots In Disguise, CSS, M.I.A, Uffie and Santogold or for hipsters who like the sound of a bunch of post new rave riot girls jumping around Space Invader and Pacman machines whilst rapping knowing lyrics about being cool and bored. LCMDF are certainly a playful bunch for sure, their rudimentary and crude energetic electronic pop providing hyperactive fun for escapees of the eaten too many Jelly Tots hospital.
With the usual handful of songs on Myspace and their own blog, LCMDF hit the UK this month for a series of dates, mainly in London. Expect to hear Bitch of The Bitches referencing Peaches in a very obvious way and adding “Oo oo oo” catchy hook lines and stuttering vocals over ass shaking rhythmic accents and d-i-y ethos echoey 80’s synth rave sounds. Another song Rayban Glasses starts all acid brass before diving into heavier bassier beats over a chant of “Ha ha, I don’t wear a bra, shock your ma ha ha.” It is certainly not Bob Dylan.
Le Corps Mince De Froincoise represent a night out on the alcopops which ends up in a neon lit basement club bouncing daftly and taunting boys. Whether when you wake up in the morning with an annoying headache you will remember anything of the night is doubtful. They are that kind of band. Enjoy the moment, but when you’ve had enough feel free to leave.

they're fun! like ladytron but more pop... will have to see if I can see them when they come back

hmmph - while they're trailing round UK I''l have to wait until april to see them play at home in Helsinki (Tavastia 3/4/09) ...
more CSS than Ladytron on second thoughts

Yes certainly more CSS than Ladytron I would say. Let me know what they are like if you see them in Helsinki. I reckon they'll be fun but a bit amateur.....