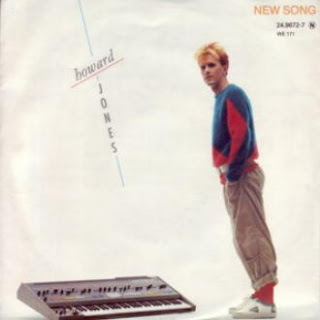 Not only is it twenty five years since the first Now That's What I Call Music was released, but it is also twenty five years since solo synth pop wizard Howard Jones released his debut single New Song. It is Breaking More Waves favourite song on that first Now album. Regular visitors to this blog will already know of our warped obsession with Jones and his one man band of retro synths such as the Moog Prodigy. This obsession lead last year to Breaking More Waves giving birth to its own one man comedy DJ Act known as DJ Hojo Hits, whom appeared at Rob Da Bank’s Bestival, alongside acts such as Underworld, My Bloody Valentine, Amy Winehouse and Aphex Twin, playing an hour long set of nothing but Howard Jones tunes.

New Song was a big hit in the UK, spending 15 weeks in the charts, getting as high as Number 3. This simple song bears a resemblance to Peter Gabriel’s Solsbury Hill in its melody whilst lyrically it is a message of positive and open thinking with Jones preaching his message of not being “Laden down by the doom crew,” whilst “challenging preconceived ideas,” unusual lyrics for a pop song.

Of course most people will remember Jones for his very eighties spiked haircut, his mime dancer Jed who performed with him and the “Ooo ooo ooo” chorus of this song, which is a shame as many of his lyrics had a vision and philosophy behind them that set him apart from many of his peer group.