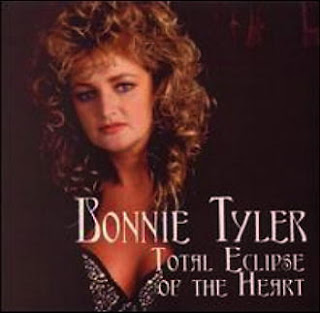 Our final choice cut from Now That's What I Call Music Volume 1 has to be Bonnie Tyler and Total Eclipse Of The Heart. Born Gaynor Hopkins in Skewen, near Swansea, South Wales, Bonnie Tyler wrapped her husky noduled vocals around this semi operatic rock power ballad which was written by Jim Steinman, the man responsible for the production of Meatloaf’s best selling Bat Out Of Hell albums. The song was a Number 1 hit in the UK and sold a phenomenal 5 million copies worldwide.

Total Eclipse Of The Heart is one of the ultimate guilty pleasures and features the most warped 1980’s video you will ever see. In it big haired Bonnie fantasises about young schoolboys as she wanders around the gothic school building where curtains blow in the breeze, backlighting and dry ice abound and half naked men cavort.

They just don’t make them like this anymore do they ?

Now That’s What I Call Music Volume 1 is re-released on the 12th January. Now That's What I Call A Challenge is a further blog that chronicles every track on the album.

We have found that if you want to fill the dancefloor at a clubnight, then this is the track to do it. Singing along, lighters aloft!! Genius.