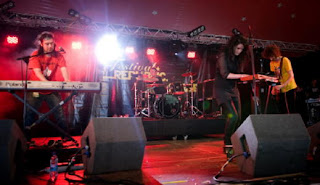 On 19th January Fight Like Apes release their new single Tie Me Up With Jackets on Model Citizen. It will be available on a limited edition 7” heavyweight shocking pink vinyl and digital download. Here at Breaking More Waves we’ve become quite obsessed with Fight Like Apes, and mentally debated for hours if they should feature in our One's to Watch List 2009 before finally discarding them on the basis that they were probably just a little too leftfield to gather wider public acclaim in the UK, despite having had some success in Ireland.

Tie Me Up With Jackets shows that Fight Like Apes have no desire to relinquish their status as the most unpredictable, primitive and comically aggressive band to come out of Ireland ever. The song sees MayKay proclaiming that she likes her meatballs in a dish, but she’d also love to see you in the nude with overcoats tied around your head and Japanese children in your bed. She then moves on to a request for her room to be fumigated as it smells like socks and tastes like apple schnapps. This all happens whilst synths and guitars do battle in a nursery rhyme fight, where the children have all been fed drugs and tied up their nannies. Tie Me Up With Jackets is the sound of a two year olds first tantrum, ending with a shouting cacophony of lovely noise. It is utterly brilliant in its madness.

At the time of publishing, there is no official video, so instead watch Pockets from the band make pancakes with Steve Lamacq below ! Yes it’s Fight Like Crepes ! You can buy the single here.

I have to make pancakes now.