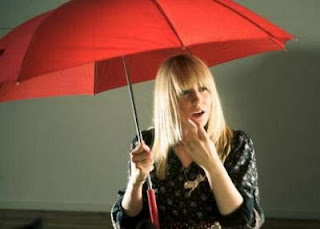 Run Toto Run, are a four piece from Manchester lead by vocalist Rachael Kichenside that play delicate twinkling lo-fi classroom indie folk. Alongside gently plucked acoustic guitars, violins and sunflower girlish vocals they add recorder and glockenspiel to give a school hall assembly sound that ensures that headmistress does not need to make the children sit with fingers on lips, as they have already been silenced.

If this band is a Myspace sensation, it’s not because of vast numbers of hits on their page, but because part of the band met via said site with a mutual appreciation of each others early musical efforts. Rachael herself had already released several very limited low key single releases including the sold out Any Minute Now EP and Long Time Later which can still be purchased on I Tunes.

Formed in March 2008 the band have already gathered some momentum, with radio play in the UK from both Steve Lamacq and Tom Robinson on BBC 6 Music and played their third ever gig at Glastonbury. The band by their own admission are still developing, and promise that later material will have an increased electronic element, but their output so far has a village fete gentleness and lightness of touch that is charming and heart warming. This is not to say that their lyrics are always full of sunshine however, as you can hear on debut UK single Your Face, a song about wasting time on a one sided love affair.

You can get the chance to see and hear Run Toto Run when they set off on their own journey in March, playing some gigs around the UK. Whilst we can be fairly sure this journey will not involve yellow brick roads and wicked witches, we would advise you to tap your ruby red slippers and wish you were there to catch their delicate, dare we say twee sound. Here is the band performing several songs live.