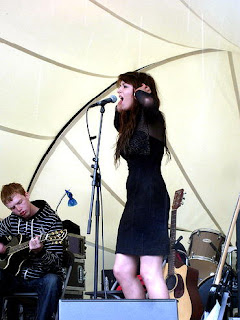 Since the start of the new year, here at Breaking More Waves we have featured a number of new artists that almost made it in to our One’s To Watch list for 2009. There was of course only room for ten and some just had to be discarded. This one was the hardest call. Ladies and gentlemen, as the lyrics of her own song say, somebody stop the music, somebody dim the lights; it's time to put the spotlight on and introduce Clare Maguire.

Just over a year ago Maguire was working behind a till in a shop in Birmingham, dreaming of a making an album. Now a major label deal is in place and that dream is coming alive.

Clare Maguire is blessed with a rich, powerful voice that is simply staggering. Ingredients of soul, folk and even a pinch of operatic intensity are locked down into the handful of songs we have heard from this gifted young singer. Burn is a simple stripped down acoustic affair where we hear the ghost of Johnny Cash kissing a female soul diva. Butcher Boy, a song about a suicide, oozes a classic traditional Celtic folk sound . The exuberant Strangest Thing provides contrast, being more modern, commanding and jazzy; it puts any X Factor winner to absolute and total shame. It’s easy to see why Clare has bagged herself a record deal. Radio 1 and 2 could love her. In fact Huw Stephens of Radio 1 already does, with Clare having played at the Swn Festival which he curates in Cardiff where she played at the Glo Bar.

It’s early days for Clare Maguire at the moment. There is no You Tube footage, no forthcoming single and only one live date announced for 2009. Maguire is dedicating her time to recording the album. If it is released this year, and if the quality of the song writing matches up to her voice, Clare Maguire could find a very appreciative audience.
Posted by Breaking More Waves Blog at 00:01

She has one of the finest sets of lungs on her that we've heard for a long while....