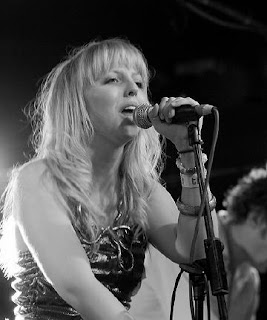 Whilst publishing our One's To Watch list for 2009 last December, there were a number of artists that we considered for the ten in the list but eventually discarded. This month we have blogged our way through those that missed out, under the title of New Waves @ Breaking More Waves. Polly Scattergood is our final artist who crept around the edges of the list, but was always more likely to be found hiding in a shadowy corner.

Polly Scattergood makes music that is experimental and emotional, sung with feminine charm and a super vulnerability that belies a dark undercurrent. With an album due for release in March, this Brit school graduate has been described as “The Kate Bush of the 21st century,” and there are certainly elements of Bush in her slightly leftfield style.

Her atmospheric angst music is a mix of piano, electronica, pattering beats and guitar that hosts some rather troubled lyrics. On Nitrogen Pink Polly sings “And all the education daddy, it never paid, because the fat man took my innocence away.” Then on the ghostly I Hate The Way she comes across like a young Beth Gibbons whispering “Well you can take what you want cos I’ve got nothing, pass me some pills, and I will go to bed, but however much I toss and turn I feel a dark place up ahead,” before singing with the air of dark madness “Doo doo doo doo doo doo doo doo - my doctor said I’ve got to sing a happy tune.” These sombre unsettling reflections on life show a deep confessional tone that disturbs, yet draws you further in. If these songs are autobiographical, she’s a psychiatrists wet dream.

Haunting and slightly disturbing, Polly Scattergood is unlikely to be featuring on any commercial radio stations in the near future, but she is all the better for it.