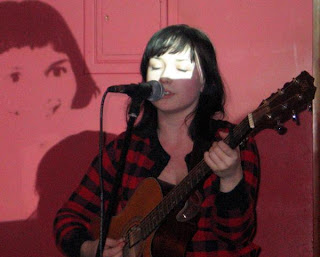 At the back end of 2007 our One’s To Watch for 2008 list featured an artist from Bradford, UK called Laura Groves. Just over a year later and still Laura remains very much an unknown. With just one single, I Am Leaving released independently on Salvia on 7” vinyl, a finger appears to have been placed over her lips with no further releases in 2008.

The reality is that Laura has been slowly building an album under her new identity Blue Roses, notching a support slot with Emmy The Great, appearing on Jeremy Warmsley’s Welcome To Our TV Show and busking on a windswept bandstand. Laura feels that she is in a different place musically to where she started out, so it was appropriate to become something new and hence the name change to Blue Roses. Her album, which was recorded in the relaxed comfort of her producers house rather than a traditional studio is now due for release this year.

Laura has explained that whilst her current live shows are simple sparse affairs with just acoustic guitar and violin accompaniment, the Blue Roses album will be a much more layered multi instrumental affair. A while ago she posted up the first fruits of the album recording sessions on her Myspace page and they bode well for a curious, warm and haunting listen. There is the ghostly waltz of Doubtful Comforts and the intimate choir girl folk of Does Anyone Love Me Now, both songs easily surpassing her previous work. The vinyl crackles and melancholy of Doubtful Comforts in particular shows a new found maturity both vocally and in mood and texture. Breaking More Waves hopes that there will be more of this to follow.

Until further new material emerges, here is the fuzzy felt and wool video for Laura’s debut single I Am Leaving which will feature in a different form on the album. The song sounds like a silver tap, dripping essence of Joanna Newsome and Alessi’s Ark, captured in a tiny perfectly formed glass potion bottle.

Dismiss Blue Roses as just another girl with an acoustic guitar at your peril, for there is magic in that bottle.

What a beautiful song and clever video!

If you like this, check out Stephanie Dosen and maybe even Duke Special. Stephanie and Laura could be soulmates; Duke Special could be her slightly mad Irish brother.

Ah yes, here at Breaking More Waves we are big fans of both Stephanies work and Duke Special and have seen both live several times ! Good choices !