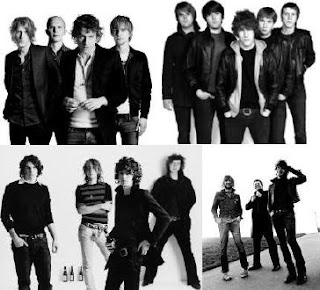 Unless you have been living in a cave for the last year or two, it is impossible not have noticed the number of young, talented female solo acts that have come to prominence in the music industry in the UK. From Adele ,Lily Allen , Duffy, Kate Nash , to Amy Winehouse the rise of the girls has been unstoppable.

Of course defining a new breed of artists purely because of their gender could easily be criticised as being lazy, they are simply artists, irrespective of sex, and in our opinion should be judged equally. However over the last few years music has been so defined by male identikit guitar bands, that one cannot really blame journalists for wanting to write about something different and new, then putting a tag on it. Little Boots, La Roux and Florence & The Machine , all of whom featured in our One's To Watch List 2009 list have all received significant media coverage in the last few months as some of the latest girls climbing to the top.

Irrespective of gender however, one element that Breaking More Waves celebrates in relation to these new artists is a return to colour and style with ownership in pop music. Significant portions of the 2000’s have been characterised not only by a lack of imagination or innovation in the music, but also the very same bands displaying the lack of ability to think outside of the box in any way when it comes to style. The skinny jeans, t shirt and leather jackets gang look of The Strokes may have looked cool when they first burst onto the scene with vibrant songs like Last Night and then The Libertines gave a reply from the UK, but the subsequent copyists such as The Pigeon Detectives, The Fratellis and The Kooks have shown a dispiriting lack of creativity which was echoed by record companies who rushed to sign them. Take one look at the picture above to see the evidence. Spot the difference. Hard isn't it?

Not every band will have style at the top of its agenda. Our last two albums of the year, by Bon Iver and Radiohead respectively were created by artists who would never be cited as stylish, their music existing outside of style or fashion. It is probably all the better for it. However, Breaking More Waves believes that one of the elements that drives popular culture forward is the interrelationship between fashion and music. Timothy Warner in his book Pop Music : Technology and Creativity talks about the clear parallels between these worlds. He identifies that both are luxury commodities, which undergo stylistic change in similar short timescales in order to renew themselves. Pop music and fashion do not ‘wear out’ but instead they ‘go out’. They both rely on high profiles in the mass media to involve potential buyers to excite or fascinate them. From the androgynous look of 1970’s David Bowie through to Britney Spears dressed as a schoolgirl in Hit Me Baby One More Time. Neither would have been as good dressed in a baggy grey t shirt and pair of jeans from Asda.

As the skinny jeans indie bloke band disappears at a rate of knots, Breaking More Waves welcomes with open arms many of these new female artists. Many of them have talent but also come with their own identities and sense of style. Kate Nash and her vintage dresses, La Roux and her wonky hairstyles, Little Boots with her half bedroom geek, half big heeled sexy minx look. One hopes that each can keep their own style and not be lead to compromise, in the same way that we want their music to be their own vision, full of their own personalities.

And as for the skinny jeans boys ? Well, who knows. Pop music is a curious thing. Maybe some of these bands will undergo a cosmetic and musical transformation, remoulding their look and sound for a new audience. Or maybe they will continue to roll out the same languid indie pop by numbers to an ever decreasing ever ageing audience, until a revival comes round in ten years time. Some will split up. It's all guesswork. Music and fashion, arm in arm, will continue to change. There’s always a new kid on the block waiting round the corner. Let’s just hope it isn’t this new kid in the video below.....