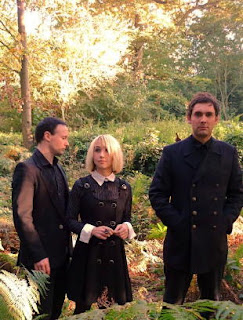 Before we all get hung up on the fact that indie guitar music is going through a bit of a crisis at the moment, here is some news to bring you joy. Welsh indie pop trio The Joy Formidable are, well, joyous and formidable.

Nor is everything they do is simple three minute indie pop however. Take The Greatest Light Is The Greatest Shade where guitar spillage growls with a weight of shoegazing noise similar to early 90’s indie goth band Curve as diminutive lead singer Ritzy offers a distant and slightly enigmatic mournful vocal.

The Joy Formidable are soon to release a fuzzily unhinged 8 track mini album entitled A Balloon Called Moaning that will be available for download, but will also be released in hard format from Breaking More Waves favourite record store Pure Groove. It is limited to 500 copies as a box set special edition with screenprinted cover and extra goodies. We recommend you get your order in early. Here's a less rude, dizzily bouncing video for another one of their tunes, Cradle.

Email ThisBlogThis!Share to TwitterShare to FacebookShare to Pinterest
Labels: The Joy Formidable