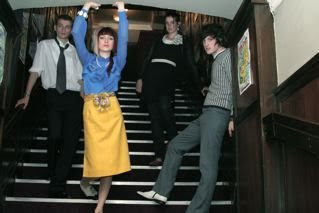 At the start of 2008 there was a lot of talk about who was going to be “The next Amy Winehouse.” With this talk commentators did not mean which once talented singer was prepared to turn into a farcical mumbling drug taking joke, but a British female soul or blues belter who could cross over into the mainstream. With her big voice, Brit school pedigree, cracking songs and cackling laugh Adele fitted the bill perfectly. And with the success of Adele the door is now open to other similar singers.

Jessie Rose of The Jessie Rose Trip is one such singer. Earning her keep working in a Manchester Casino performing soul and jazz covers by day, by night she’s put a band together that are creating quite a buzz. After teaming up with drummer James Wood the duo decided they need bass and brass to complete their sound. Step forward Sarah Buckley from High Wycombe and Johnny ‘Tiger’ Thomson from Glasgow who responded to an advert placed in the Royal Northern College Of Music. With Jessie writing the songs and the other players adding their own interpretations The Jessie Rose Trip was born.

Since April 2008 the band have begun to develop a building profile, with support from Manchester XFM’s ex Inspiral Carpet Clint Boon and a well received live slot at the 2008 In The City event. The bands songs are a combination of jazzy blues, skanking pop and soul with added piano, trumpet, flugelhorn and ukele. Yes you read that correctly. Flugelhorn and ukele. There’s Forever And A Day which has a lilting summery feel to it and For Love Or Money which has whistling, jazzy bass and Jessie singing “Diddly dum doo” over head bobbing guitar riffage.

There is no Brit school pedigree here, but buckets of raw vocal talent and Jessie’s own fully formed vintage fashion identity. This band almost made it on to our One's To Watch 2009 list for this year, but at the moment it's probably just a little too early for them, and although the musical ability is self evident they still need a killer tune or two. We call them the wow and punch moment. The place in time when a tune comes on the radio and you just have to stop whatever you are doing to listen. The pull the car over moment. Adele had Hometown Glory and Chasing Pavements to propel her into the stars. Once the Jessie Rose Trip have that they too could be nipping through the door that Adele and Winehouse opened.

Catch the band playing live in the video below and see a small interview.

Email ThisBlogThis!Share to TwitterShare to FacebookShare to Pinterest
Labels: The Jessie Rose Trip

I saw the Jessie Rose Trip in King Tuts a few weeks ago and they were great. Tight with great songs. I was impressed.