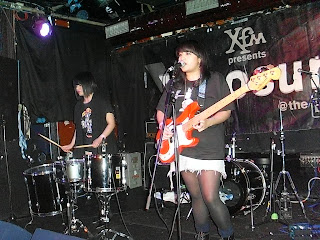 An Experiment On A Bird In The Air Pump
The annual XFM Xposure All Dayer at the Camden Barfly is a gruelling musical marathon that showcases some of the latest indie and rock upstarts and urchins. A slog of a day in a darkened room that smells of lager and stale bodily odours, its one for the dedicated and determined only. But with determination comes reward, as previous years have seen such acts as Jamie T, The Horrors, Frank Turner, Mystery Jets and Friendly Fires all tread the boards. So who would this years winners and stinking losers be?
Pulled Apart By Horses have almost finished their set by the time Breaking More Waves arrives. We witness five minutes of flailing, speaker stacking climbing, punishing, hair flinging, uncompromising, dirty old school rock riffage with a big old dose of shouting. Brains are pulled apart by this brutalism, never mind horses.
An Experiment On The Bird In The Air Pump look and sound like three girls who have just stepped out of a Tarantino film. With earthy guttural gothic-blues vocals, if looks could kill scowls, stripped down stage front drums and a t-shirt that proclaims “Jesus died for somebody’s sins,” they are artily cool and scare all the Top Shop indie kids away. This is the true alternative. An Experiment On A Bird In The Air Pump are glorious in their instrument swapping darkness.
Harrow based quintet Rogues are so blatantly now we suspect a backlash before they even start. We’ve blogged about them before, and despite their early placing on the bill, they are one of the more outwardly commercial propositions on stage today. They meet the generic white indie pretty boy, haircuts and skinny jeans look but add eighties fashion and synth sounds to their urgent riffs and belting dance rhythms on songs such as Not So Pretty. Like a modern take on early Duran Duran or Spandau Ballet combined with guitar sounds of Foals and Bloc Party, they pull a young crowd at the front of the stage and could easily find this fan base growing.
The multi cardigan wearing Laurel Collective are up next, their quirky oddball sound being inventive but not immediately engaging. The twitchily spinning Vuitton Blues combined with bands geeky dancing and obvious enjoyment for what they do gradually wins the crowd over. Mixing musical styles a plenty, co vocalists Martin and Bob provide handclaps, wide eyes and sweet big hearts in their rough pop style to produce an almost feel good factor in the room.
Another previously blogged artist Rose Elinor Dougall, ex Pipette, brings pop sophistication and casio confidence as she tries to eye sex the audience with her sideways glances. Spending most of her time behind her keyboard she excels the most when she leaves their shield and sings centre stage. Her material is warm and vibrant with the highlight being the almost stomping indie Come Away With Me.
“This is a song I wrote a couple of days ago, so I’ll probably fuck it up, but better to do so now than when it’s being recorded,” jokes mournful vintage country / folk singer Jay Jay Pistolet before melting hearts with his tender, heartfelt tunes. Girls swoon as he almost apologetically says “Thanks for being so polite,” and admits that he is actually a “cheesy guy.” His earnest demeanour and the timeless romantic simplicity of his songs provide a victory for the meek in a rock venue. Jay Jay, so good they named him twice.
Are you still with us on this marathon? At this stage Breaking More Waves almost hits the wall. But that wall is kicked down hard by Middle Class Rut. MC Rut as they are also known are a two piece from California that make the sound of an army. With a lead singer that shakes his head so hard we are scared it will fall off, and a bare chested drummer with the words ‘For Sale’ emblazoned across his chest, they spit out high volume, powerful rock in capitals. It’s almost unbelievable that the sound they make is coming from just one guitar and a set of drums. It makes The White Stripes look like big cissies. This is hard, ferocious, pummelling stuff. Donnington and Reading Festivals must be calling. 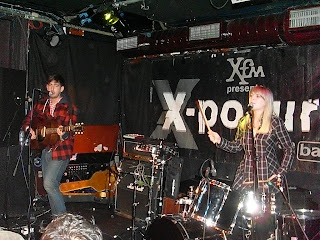 Breaking More Waves has come across Slow Club live several times before, and tonight they are the best we have seen them. They are utterly engaging, uplifting and bring big smiles to the crowd. Despite false starts and songs that collapse in the middle Charles and Rebecca’s take on alt. country is the absolute highlight. Comparing the gig to a Take That reunion and charming with tales of teenage parties in limousines with bin liners for windows, they charge through a set of campfire ballads, cooing and yodelling that makes Breaking More Waves think that when they release an album later this year it will be an essential purchase. The vocal interplay and chemistry between Charles and Rebecca is growing with every gig they play, but they retain their sense of fun and ragged roughness that made them so appealing in the first place.
Esser has been the subject of considerable hype of the last few months, and based purely on this evenings performance, it may not be fully justified. With his big quiff and turned up jeans, he certainly looks the part, and his attacks on a drum placed near the front of the stage provide some visual entertainment. Unfortunately his quirky funky electro pop lacks distinction through a rather muted expressionless vocal and song construction that is built around simple one line choruses repeating themselves until you have no choice but to submit . “Oh you’ve got me in a headlock, nothing in the world’s going to help me now,” he chants over and over again, but these words fail to move us in any way, except possibly to the bar.
So it is left to Twisted Wheel to up the ante and provide a thrilling and exciting end to the evening. If like Breaking More Waves you subscribe to the theory that music is an art form that needs to constantly evolve and challenge in order to remain exciting, then Twisted Wheel will be your worst nightmare. With the sneer of The Clash, the drive of The Jam and the football terrace mentality of Oasis, Twisted Wheel are a delight to those who think that The Enemy are the best band the UK has produced this decade. Lads in polo shirts are suddenly slam dancing in a circle to the front and the venues bouncers are kept very busy. The band are furiously fast and tempestuously tight, but as bodies fly past it leaves Breaking More Waves feeling that it’s rather like watching a tribute band to lad culture, and we're not sure if that is really where we want to be in 2009.
Then it's over. Rather like a real marathon the place is sweat soaked. It stinks to high heaven. But the floor is covered with crushed plastic lager glasses rather than bottles of water. We have made it, a mini indoor festival survived, the inelegant beauty of a toilet venue has not quite destroyed us.
Posted by Breaking More Waves Blog at 01:07