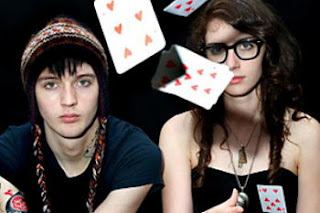 Are exlovers (note the intentional lack of capital letter) really that ? Or is it just a neat band name to get people talking ? Lyrics such as “We’ll keep secrets from each other,” in their sad sounding and strangely titled song SOF ( yes, capital letters this time) certainly don’t help.

Irrespective of past relationships and whatever secrets they hold, exlovers name is out of the bag and beginning to spread. Tours with acts such as Cheeky Cheeky and the Nosebleeds, Golden Silvers and Pete and the Pirates have lead to exposure for the group. Their restrained mix of subtle melodies, boy girl harmonies and jangling guitars can be heard on Silhouette, a single released late last year. It provided a pleasant and slightly dreamy sound that would fit neatly in the record collection of those who like bands such as Belle and Sebastian, Teenage Fanclub and other late 80’s / early 90’s Scottish indie groups, even though this five piece are from London.

The sound of exlovers is rooted resolutely in old school indie where sweetly chiming guitars are contained and never veer into rock riffs or mosh pit pleasers. These are the kind of toe tapping, head nodding harmonics that have no ambitions to play Wembley Arena, preferring to scuttle and shuffle around the fringes, melting a few hearts in the process.

The group are due to release a new single Photobooth at the end of February following a lengthy support tour around the UK with Emmy The Great and a one off date supporting Pete Doherty.
Posted by Breaking More Waves Blog at 00:01

Email ThisBlogThis!Share to TwitterShare to FacebookShare to Pinterest
Labels: Exlovers