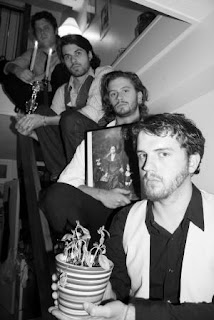 Cherbourg are another band that tumble and fall from the trap door that has seen artists such as Mumford & Sons, Alessi’s Ark (both in our One's To Watch 2009 list), Laura Marling and Noah & The Whale drop through it. Previously known as Davie Fiddle & The Lucky Egg, the band have changed their identity to a name that can probably be taken a little more seriously.

Consisting of Andrew Davie on guitar and vocals, the ‘surely it’s a made up name’ Phil Fiddle on fiddle, mandolin, guitar, piano and vocals, Kevin Jones on bass and vocals and ‘Ho Ho ho cue the santa jokes’ Chris Maas on drums, the band are releasing their debut EP Last Chapter Of Dreaming through Chess Club at the start of February. The EP is bound to find fans from amongst those who love the so called new folk revival.

Cherbourg create a sound that is full of soulful traditional folk character. They have a sense of the dramatic in their music without ever being overblown. Never Love Again starts off with Fisherman’s Blues era Waterboys fiddle before settling into a more mournful sound. The lead vocal declares “I will never love again with all my heart, it just falls apart every time I try.” It is the sound of Gary Lightbody from Snow Patrol if he had decided to wear sack cloth and hang out at the Cambridge Folk Festival rather than being backstage at V Festival drinking white wine. The scope of the song Horses is almost middle ages, with violins and guitars creating a Robin Hood style misty forest soundscape of chanted melodies and soaring masculine beauty. One almost expects Maid Marion to feature on backing vocals.

Despite lyrical sadness the music is heartily warming. Expect to see Cherbourg grow in profile during the year.
Posted by Breaking More Waves Blog at 00:01

Email ThisBlogThis!Share to TwitterShare to FacebookShare to Pinterest
Labels: Cherbourg