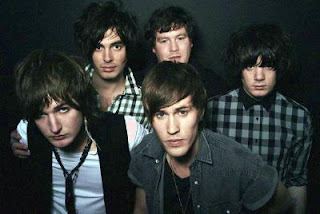 Rogues, a new band from the UK are not to be confused with a plethora of other groups with similar names. They are certainly not The Rogues, English Rogues, Rogue Wave, Rogue Dolls or even Rogue Traders. They are simply Rogues. A male five piece which includes three brothers in their number, they formed in the summer of 2008 and have been busy creating a blend of accessible funky hip swinging indie dance.

Currently unsigned, in March 2009 the band will release their debut single Not So Pretty, on a limited run of 300 copies. A slice of Foals like angular grooved up guitar and multi layered vocal harmonics it could easily move feet on the indie dance floor. In fact, Not So Pretty is so Foals like we almost wonder if it is Yannis and co under a different name. Unlike Foals however Rogues map is centred on accessible songs and is virtually yelp free. There are synthy opening slabs, percussive cowbell show downs and even a moment on the opening of their tune Angel Blonde where the bass sounds like a ship lost in the fog. Breaking More Waves also detects a slight eighties vibe, which right now seems to be the decade to be referencing to gain credibility with the cool kids.

Rogues are out on the road in February and March, supporting Iglu and Hartly on three dates before eleven dates around the country in various small club venues, then they hit the heights at the somewhat bigger Koko in Camden, London.

Email ThisBlogThis!Share to TwitterShare to FacebookShare to Pinterest
Labels: Rogues