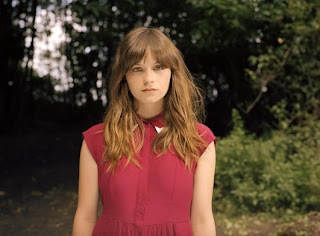 The world of pop is a fast moving beast. Just ten months ago we watched Gabrielle Aplin play a bunch of songs in an out of the way pub in Portsmouth. Now, because of a couple of snowmen, a well-known UK high street retailer and a rather saucy pop band from Liverpool in the 80’s, pretty much everyone knows who she is. As we suggested when we featured her in our Ones toWatch 2013 post in November 2012 the danger for Miss Aplin now is being perceived as ‘that girl that did the Frankie cover.’ We’re reasonably confident that Aplin will be able to weather that storm, as based on her three previous EP’s and the live shows we’ve seen her play she’s got strength in her own material as well.
Here’s one example. It’s called Salvation. With a piano sequence that is undeniably similar to Adele’s Hometown Glory, it almost sounds as if Gabrielle is paying tribute to the snowmen in THAT advert. “I never meant to fall for you,” she starts before adding “all that I could see was white.” Then there’s “you are the snowstorm.” But if Gabrielle has fallen for Frosty or some other snowman / person that’s OK, because let’s all remember that it wasn’t so long ago that Kate Bush sang about a very romantic encounter with a snowman and she went all the way.
For this week only you can get this song for free from itunes by clicking here. Gabrielle’s album English Rain, from which this song is taken, will be released on April 29.
Gabrielle Aplin - Salvation (Lyric Video)
Posted by Breaking More Waves Blog at 19:30

I love Gabrielle Aplin. Her Salvation song is such so wonderful and very nice to the ears. Seriously, its one of the most beautiful thing I have ever heard.

Definitely see the Hometown Glory comparison. Is there a bit of a breathy Lana-esque-ness to Ms. Aplin's voice too at times?