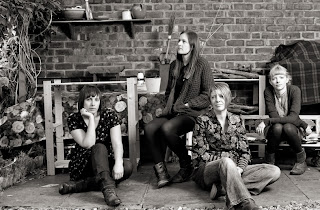 Bridie Jackson & The Arbour melted a fair few hearts with their Glastonbury Emerging Talent Competition performance a few weeks ago and bagged themselves a slot on the Acoustic Stage at this year’s festival.

Although the band themselves may or may not be maestros of the dance floor boogie, their name isn’t one you’d associate with being ‘in da club’ really is it? Maybe in some warped other-world Bridie hangs out with David Guetta or Skrillex, just next to where we’re writhing about semi-naked in a foamy hot tub with Britney Spears and Justin Timberlake on a terrace in an expensive minimalist architect designed villa halfway up a mountain. But this is the internet and the internet is real life isn’t it? We’ll let you decide on that one.

But there’s some new music (of sorts) out there and it’s a bit of a surprise, it’s a remix. Taking the marvellous Please Forgive Me My Human Ways, an acapella track from the band's long player Bitter Lullabies, we were expecting a travesty. Bridie Jackson’s sound is arguably not one to be messed with, its purity and sparseness in danger of becoming soiled by adding anything at all.

But wait, this remix works. Why? Because it doesn’t take the obvious route of adding some glitchy beats and of the moment samples, but instead develops the original giving it an electro-blues feel. It’s not the sound of being in a club but the heavy night gone wrong walk home afterwards.

You can buy it from Bandcamp here, alongside the original and a live version of their song Mucky for less than the price of a pint of beer (or possibly even a half if you live in London). Bargain.

Email ThisBlogThis!Share to TwitterShare to FacebookShare to Pinterest
Labels: Bridie Jackson and the Arbour

Thanks for posting this.This is awesome!!