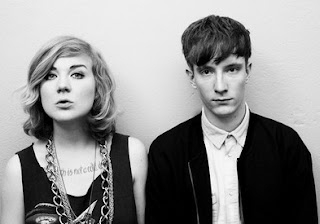 Not content with winning Eurovision, (let’s face it Euphoria by Loreen was the only song in the competition that you’d want to listen to again wasn’t it?) the country that could hold a master class on well executed pop now brings us Anna Berglund and Simon Eriksson aka Years Away from Stockholm, Sweden. “We grew up in the same tiny town and went to the same school at the same time, yet we had to go all the way to Russia to actually meet for the first time,” the duo explain on their website, so all credit to Russia for helping out too – and let’s face it even although the Russian singing grannies Eurovision song was pretty appalling they did have a unique charm. So well done Russia and Sweden, you’ve done music proud.

Years Away appear to be very new indeed, their Facebook page having only been created at the end of May. It makes us wonder how long is it before music blogs such as ourselves start writing about bands that haven’t even been formed yet, such is the hyper speed of the internet. Yet Breaking More Waves isn’t the first to post about the band, with Years Away appearing on both Just Music That I Like and It’s A Trap in what seems like seconds after they were unleashed onto the world.

The song that we’re introducing the twosome with is Starting Fires. Once you’ve got over the fact that Anna is singing about being a firestarter without sounding anything like the Prodigy you’ll realise that this a quite the perfect pop song. “Let me touch your skin as the ceiling’s caving in,” she sings prettily and drums crash down like the best 80’s film soundtrack that you’ve never heard. You’ll probably sigh with relief that there are people making stuff like this. Just so lovely. A fine start.

Email ThisBlogThis!Share to TwitterShare to FacebookShare to Pinterest
Labels: Years Away